Jen made a lot of new pretty animations to indicate which things are clickable!

We also fixed our ugly grey message boxes so that everything is a nice overlay screen instead.

There are a lot more things to interact with, as well. We also added music to the first area.

Somehow there is a minor glitch where you have to press x twice on occasion to close the console. Game Maker is frustrating.

*Note that left and right arrow keys are used for navigating all menus, including the test screen* .gm81 because the exe is not working right now: You play a girl who comes from a utopian society, sent to explore a society entirely different from your own… OR IS IT

We wanted to focus on exploration and creating a nice atmosphere.

Sometimes, the collisions are a little janky and we had to use popup message boxes at a few points in the game. Also, we intended to have a title screen and a nice end screen, but ran out of time.

To cycle through selection screens, use the left and right arrow keys (including the ‘test’!)

We now have flowcharts showing the progress / interactions in our game! Yay!

All detailed text/dialogue will be done mostly in today’s class.

Pictures are under the cut.

Here are some screenshots of the whiteboard that we planned out our storyboard on. (I’ll retype everything below for clarity.)

I’m one of the Windows people, so I only have an .exe file. The premise is that all of the color has been drained from your world, and you must find out how to fix this. Some of the riddles that you have to solve are quite difficult, but Google should be able to help. 😛

I can’t figure out how to upload a Mac executable so here’s a screenshot (background is a work in progress) + the music I’m using! My game is currently untitled but the premise is that you are exploring a futuristic world. I’m considering the idea of having time stopped for everyone but you and a few other characters that you encounter, and you have to explore/unlock parts of the city and determine who’s behind the time-stop.

I appreciate that the author pointed out the value in games in which “slow, continuous traversal becomes a fundamental aspect of gameplay.” These sorts of games offer an experience that I think is much more immersive and engaging than a game in which the scenery whizzes by. I think that the fun of Crazy Taxi does not come from the scenery/journey itself but from the actions which the player chooses to take – do you run over this person, start driving in the ocean, or take the most direct route to your destination? I prefer games such as Shadow of the Colossus that have sweeping landscapes and focus on open exploration. Here, your actions feel much less limited, even though in reality you have few choices of what actions to take. Rather than just traveling, you can interact with the landscape and enrich the game experience through small touches, like finding animals to kill for food, etc.

Narrative Environments – From Disneyland to World of Warcraft

This gave me something to think about in terms of how I want to create my next game. It’s important to structure your environment around the story to enrich the storytelling and gaming experience rather than simply pasting a background onto your game without thinking about how your story shapes the landscape and vice versa.

I thought the comparison between WoW and Disney World was very apt; especially the comparison of WoW’s differently themed “lands” with Disney World’s distinctly themed parks. In a sense, I think WoW could be considered part of the next generation of ‘theme parks’; except instead of spending a few days there for vacation, you become so immersed (as a ‘player/resident’ rather than a ‘guest’) that you end up investing very large amounts of time into it.

You have 10 seconds until your homework is due! Figure out what objects on your desk you can click on to attempt to finish your homework, and see what happens. No matter what you click, your homework won’t get done… clearly you shouldn’t have procrastinated so much! 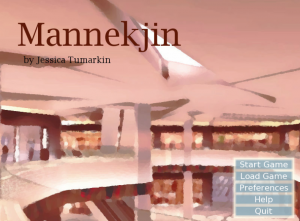 You play as a mannequin, dissatisfied with your life in Victoria’s Secret. You decide to explore the mall and talk to other mannequins to see what other opportunities are out there for you.