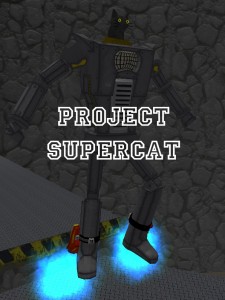 Project SUPERCAT: Escape From Geothermal Zone is an exploratory platform adventuring game with lava and fire and badguys and you are a cat.

You also are a cat that has a robot suit that can punch things.

I have a windows version that I will have to upload a screenshot later since I have it on my desktop at my dorm. I had a little trouble exporting but almost had it figured out but had to come to class. Hope you guys won’t have to wait for long!

Okay I just realized that these images are really minuscule but on the left is a brief glimpse at the main character who is a little girl and on the right is the monster that she can turn into to beat up other monsters.

So basically that is the main premise of the game, figuring out why you can turn into a big monster and to do that you have to fight monsters and collect certain items. Basic adventure game style but I am pretty excited for it. The environment is going to be really scary and the music is going to really contrast it.

So the game that I got this from is actually somewhat of a grisly horror game and the feel of this song just really isn’t that and it is one of the reasons I love that game because of its quirkiness. Anyway, enjoy the song! Love you!

WARNING!!! Not anywhere near the finished product that I want it to be but here is Jeremy v1. It is really really rough. Need to fix images and transitions and add sound. Sorry! I plan to have a new version up soon, because it really is messed up. There will be audio, I am going to trash the character overlay and just go with background images and do a better job with them. I am also going to have more dialogue. Any suggestions welcome. Sorry about the really buggy game though.

So for this assignment you play as a hobo detective named Richy Gillis and the goal of the game is to solve a crime at this scene. The environment will be pretty abstract and overall the feel of the game will be pretty monochromatic. I also like the idea of characters and objects having a line drawing quality to them as well as being transparent so that the background shows through their white spaces. I am pretty excited for this one. Any ideas or suggestions are more than welcome! 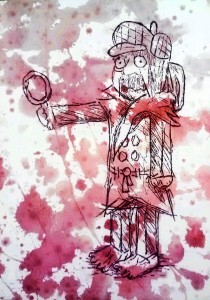 Title: Richy G and the Case of the Missing Moonshine

So I have figured out exactly what I want to happen in my game and how it will fit it to the requirements. I like the idea of choosing only 4 colors to be in my palette and that would be white for the background, black for the drawings, red for the blood and blue for the bottle of moonshine.

The setting is in an alleyway and the start of the game starts with Richy G who is a hobo who lost his bottle of moonshine and goes on a small adventure to get it back. In the screen there is a cardboard house, another hobo and a syringe. The first part of the puzzle is to click around in the right order to get the other hobo to help you out. So you click on the hobo to have him talk to you to tell him what he wants, which is his heroin. So you have to go get the syringe and he then opens up the door to the cardboard house which reveals a dead person some trash and a backpack. The splotchyness in the image i posted above would be a good example of how i want the blood to look like. The second puzzle is even more simple where you just have to click around to find the bottle of moonshine (which is in the back pack). Then it is over. Animation is going to be really simple since I am not very good at animation. When you talk to the hobo a speech bubble will appear with an image so there will be no words throughout the game. Nothing will be shaded and I really want that hand drawn feel to it and there will be a sense of movement by redrawing the same image 2 or 3 times and have it bounce between the two so it has a shaky quality to it.

As far as response to clicking, when you click on something, Richy G will walk up to it before something will happen.

So both of my characters come from pretty dark places and the goal for me is to make the player uneasy. 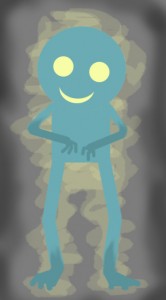 So Jeremy is your imaginary friend since your childhood and has convinced you that he is your only friend ever and that if you ever leave him that he will hurt you. He reveals things about your past that you don’t know if it is true or not but is pretty horrific. He changes color based on mood. There really isn’t any winning to this game. Jeremy wants you to kill everyone and endings can be you doing his bidding or killing yourself. 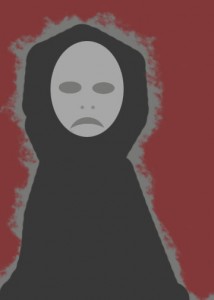 I want to base you off of schizophrenia since it is a really interesting topic to me. I want to include some things like paranoia and changing the surroundings around you. Something like you have a spider on your back. Talking to you would be interesting since it is you. You are talking to yourself but at the same time it is a being that it is still you. This one would be a bit more complicated and I would have to do a bit more research to know exactly what I would want it to be. There would be no winning in this one either.

I don’t have this idea as fleshed out as I would like it to but the idea is pretty simple. You have very minimal control over this lifeless stuffed animal and this child and world interact with this little bear, often treating it as alive. The choices you make are subtle and do not directly control the stuffed animal because it is of course lifeless. I would love to have interesting illustrations for this story that I make myself but I currently don’t have any that are worthwhile using.

Mr. Bumpy Lumps is sitting quietly on a shelf in a bright pink room. Black glass eyes stare widely at the open door and a huge grin is set on his face welcoming anyone who enters the room. Far off in the distance the indistinct murmurings of a little girl’s voice can be heard from somewhere outside of the room. The window above the shelf is open and a strong wind begins to seep into the room.

>> The wind tips Mr. Bumpy Lumps over off the shelf.

>> The wind shuts the door.

This wouldn’t really be an enthralling story but I thought it might be a unique way to approach a story.

For my second idea I was possibly thinking of taking the context of the choices completely out of the story. So the reader would choose a bunch of seemingly random choices at the beginning and then the story is revealed and as they read on they can see how their choices made a difference in the story. In a way it is playing with the idea of taking the control out of the readers hands in which interactive stories are known in giving. I did not think that visuals would be necessary for a story like this and I am also at a loss at what the story would actually be. Off the top of my head it would be a story of a little girl who has lost her teddy (I like teddy bears okay!! Gosh!) and goes around this unearthly city in search of it. She interacts with a multitude of characters during this search and the reader unknowingly does stuff to them since they were not given the choice in context.

CYOA:  As far as the readings went I tried to briefly look at all of them but I was most attracted to CYOA most likely because it was not a white onslaught of pdfs. As a visual person I was very grateful for the straightforward and simple visuals that accompanied the text and made it easier to read because of the brief breaks. The reading itself I thought was mildly interesting and I felt as though it covered it’s bases as far as history and thoughts altogether about interactive stories. I also thoroughly enjoyed the animations and galleries of the visual choice paths. It was fun to see the choices taken out of the story and plotted in an appealing way.

Hello I am Rachel Tadeu,

I am a Junior art major at Carnegie Mellon and I am interested in going into the gaming industry although my skills for the field are subpar at the moment. I enjoy working on teams and overall I am good at working and tweaking with the design of an idea. I am an okay programmer and for the most part I know how to program in Python, Processing and a little bit in C. Art wise I am very good at drawing from life and for the most part I can use Photoshop and I am a beginner at 3D modeling. Just trying to be as honest as possible. Hope to learn a lot from this class.