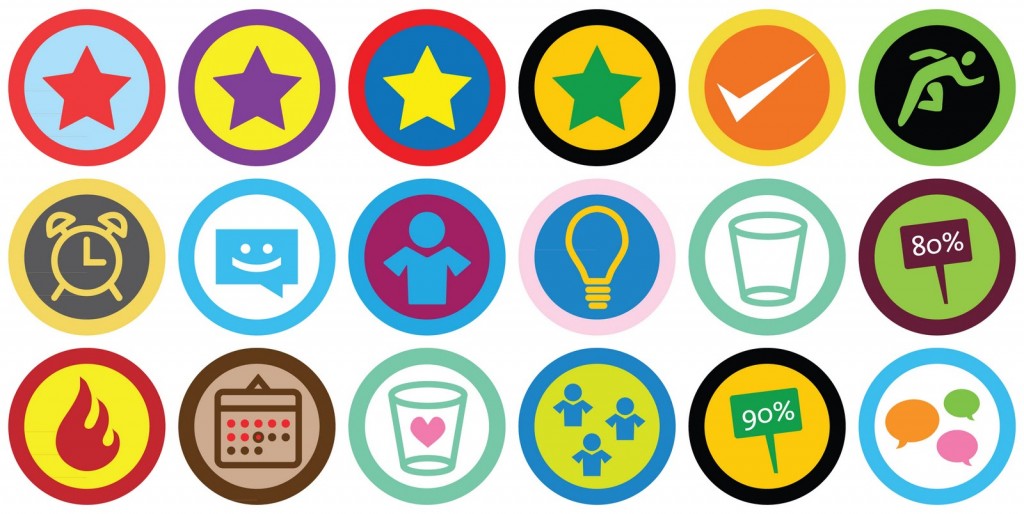 Gamification is the process of adding games or gamelike elements to non-game applications to make them more fun and engaging.

Can you think of examples of gamification?

The trend was popularized by services like foursquare and yelp to encourage participation (user generated content) but badges and status items or privileges were already widely used in online forums (e.g. newgrounds) and in gaming networks like xbox live or PSN as extra layer of scoring.

Have you ever participated in a gamified activity?

A gamified article about gamification from the NYT

Precursors of gamification can be found in loyalty points, air miles and coupons although the gamification masterminds are typically trying to avoid rewards with an actual value, that’s the point of “having fun”.

Replacing monetary incentives with honor/status based incentives to disparate activities has been successfully tried before. 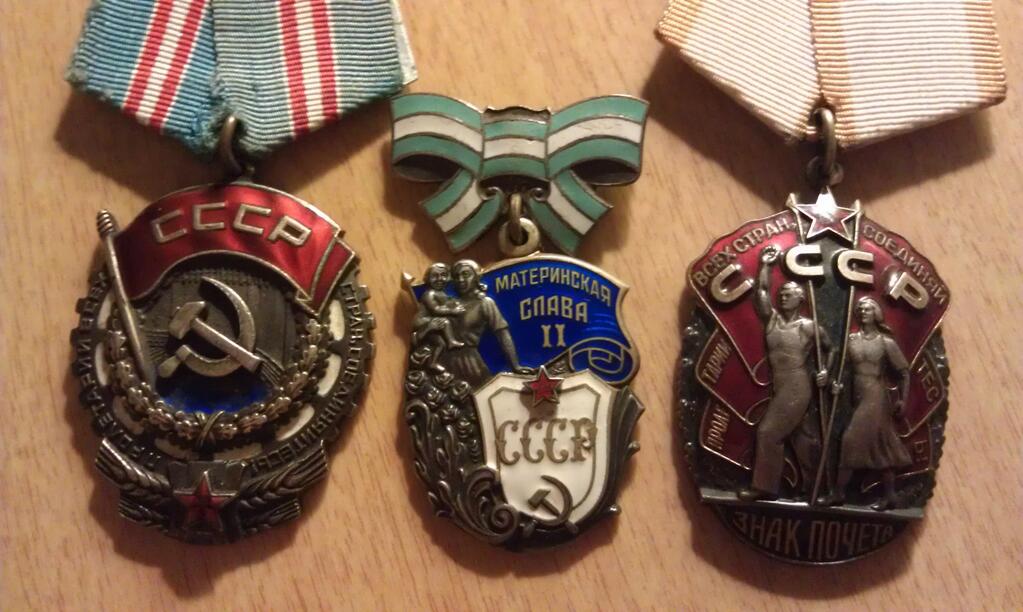 Soviet and American Precursors to the Gamification of Work

That problem being that gamification isn’t gamification at all. What we’re currently terming gamification is in fact the process of taking the thing that is least essential to games and representing it as the core of the experience… They’re great tools for communicating progress and acknowledging effort, but neither points nor badges in any way constitute a game.

Fun arises out of mastery

Beyond simple badges gamification is intertwined with parallel trends internet of things, quantified self movement, and, more in general the age of sharing.

More things now can be effectively measured and displayed:

Criticism: side effects
Rewards based on certain indicators can have unintended consequences and side effects. Competitive-minded people can cheat undermining the system. See Hypermiling.
Focusing on the “wrong” metrics can produce detrimental effects as in the various cheating scandals related to standardized testing (especially when they are linked to teacher or school funding).

Put a sensor in it

Criticism: the ethical limits of quantification/gamification

Are these people recycling because they understand the value of it or because they want to score higher than their friend? 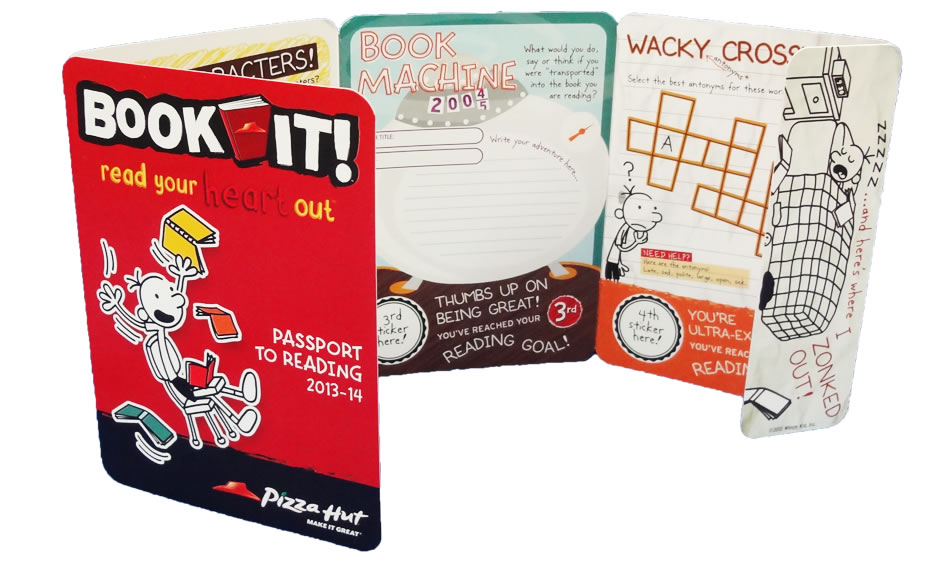 People actually do inferior work when they are enticed with money, grades, or other incentives. Programs that use rewards to change people’s behavior are similarly ineffective over the long run. Promising goodies to children for good behavior can never produce anything more than temporary obedience. In fact, the more we use artificial inducements to motivate people, the more they lose interest in what we’re bribing them to do. Rewards turn play into work, and work into drudgery.

Criticism: gamification makes self-tracking appealing and encourages you to be careless about privacy
Sharing information about location and life habits makes you more vulnerable to manipulation (super targeted ads or political campaigns); to stalking, cyberstalking or doxxing; to exploitative and discriminatory practices (future employers, insurances and health provider making people pay for “riskier” lifestyles). Once your data is stored and sold it will be stored forever, the political climate may change etc.

Whenever you indulge in a bad habit or fail to complete one of your daily tasks, you lose health

The central distinction that must be transcended is that established between play and ordinary life, play kept as an isolated and provisory exception. “Into an imperfect world and into the confusion of life,” writes Johan Huizinga, “it brings a temporary, a limited perfection.” Ordinary life, previously conditioned by the problem of survival, can be dominated rationally — this possibility is at the heart of every conflict of our time — and play, radically broken from a confined ludic time and space, must invade the whole of life. 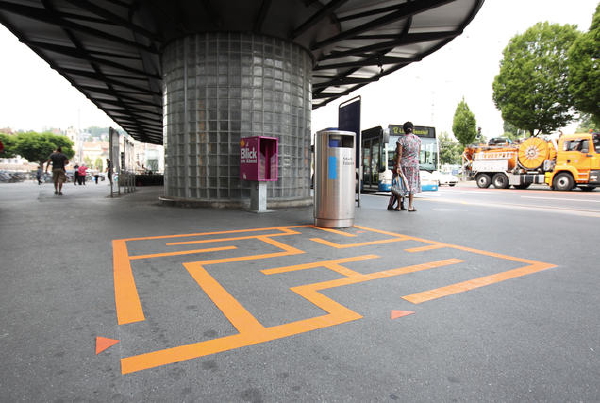 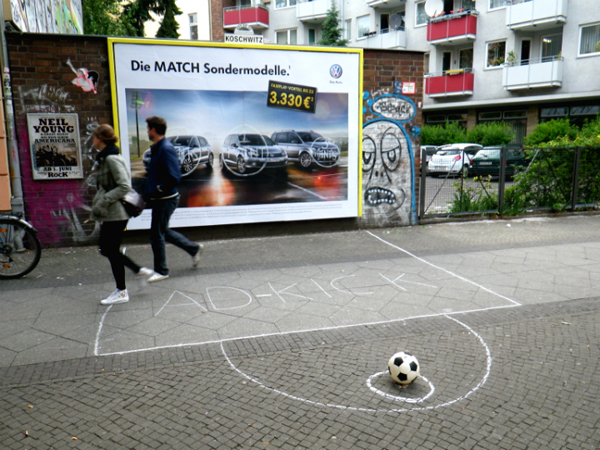 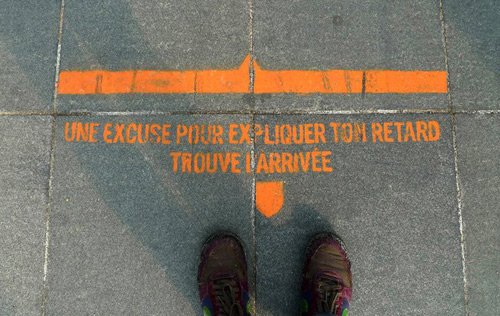 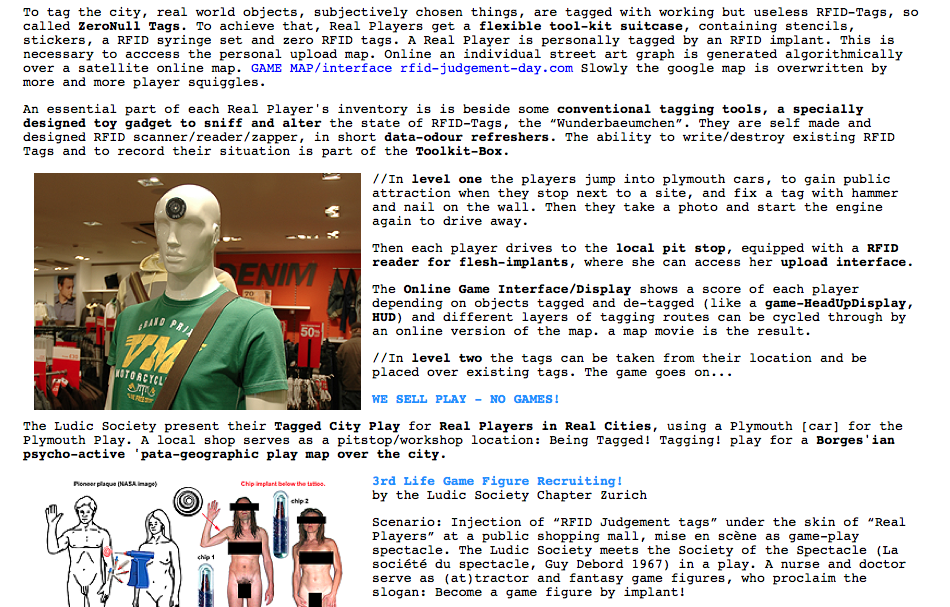 Cruel 2 B Kind a game of benevolent assassination

Link: The game was incredibly simple – we put the names of all of the registered attendees into a big alphabetical list. Your goal was to find the people above you and below you on the list. When you found one of these people you brought them to a game referee and formed a “link”. The goal was to be a member of the longest chain at the end of the conference. Amazingly, some pretty compelling gameplay emerged out of this simple system. Hardcore players began to actively grow their chain by seeking out the people on either end and helping them make their links. By the end of the conference, people were wandering through the lobby holding big signs with letters of the alphabet on them.

Bite Me – The goal of the game was to not have a Bite Me card at the end of the conference. You get rid of a card by approaching someone and ask them “Are you playing?” If they said “Bite me!” then you were stuck and couldn’t give them the card. But if they said anything else you handed them the card. Now they were bitten and had to try to get rid of the card.

Destroy all Developers by Eric Zimmerman: A networking game for GDC involving business cards. You pick a team to be on – programmer, designer, musician, artist, production, business and are handed a card with a mission. My mission was Phone Digits: bugging communications. I had three missions I could do:

Once you complete one of the missions, you turn the card in for points and are assigned a new mission.

Power play – a conference game around the central themes of power and play. Marina Zurkow and Eric Zimmerman designed Power at Play, an interstitial game embodying the core values and aims of BLUR 02 in a performative way. The goal of the game was to facilitate social interaction. Stimulate new lines of thinking, and inject improvisation into the convening context.

Playful tasks
Execute one of these tasks/assignments:

SFZero is a Collaborative Production Game. Players build characters by completing tasks for their groups and increasing their Score. The goals of play include meeting new people, exploring the city, and participating in non-consumer leisure activities.