Assignment: make an online multiplayer environment in which remote users can communicate in non-functional ways, create together, or just “feel” each other’s presence in a unique way.

“In 1922 I ordered by telephone from a sign factory five paintings in porcelain enamel. I had the factory’s color chart before me and I sketched my paintings on graph paper. At the other end of the telephone, the factory supervisor had the same kind of paper divided in to squares. He took down the dictated shapes in the correct position. (It was like playing chess by correspondence.)”

For a concert performance on the following day Brecht divided the stage into two halves: the ensemble, chorus and speakers were placed on the left-hand side («The Radio»), and on the right, separated by a screen, sat Josef Witt in his shirt-sleeves to represent «The Listener» and declaim the sung part of Lindbergh. In the radiophonic version this was actually supposed to have been realized by each listener in person, sitting by his own radio set at home.

This piece was a proof of concept of his visionary idea of radio:

“[R]adio is one-sided when it should be two-. It is purely an apparatus for distribution, for mere sharing out. So here is a positive suggestion: change this apparatus over from distribution to communication. The radio would be the finest possible communication apparatus in public life, a vast network of pipes. That is to say, it would be if it knew how to receive as well as to transmit, how to let the listener speak as well as hear, how to bring him into a relationship instead of isolating him. […]
Der Flug der Lindberghs is not intended to be of use to the present-day radio but to alter it. The increasing concentration of mechanical means and the increasingly specialized training–tendencies that should be accelerated–call for a kind of resistance by the listener, and for his mobilization and redrafting as a producer.”

The Radio as an Apparatus of Communication

A Hole in Space – Kit Galloway and Sherrie Rabinowitz (1980)

“If the boundaries between art and life dissolve it will be the result of artists migrating towards a new order of artmaking, abandoning the conventional standards and practices and becoming ‘new practitioners’ or systems integrators, who produce situations, contexts, and permanent environments or utilities. The ‘new practitioners’ can begin the process of healing the aesthetic wound that has disfigured the business of Art, and continue the aesthetic quest in more relevant directions.

New creative activities must emerge such as multi-media creative solutions networks, not simply computer networks for Artists, but rather multi-media telecommunications networks with agendas that can engage multi-disciplinary constituencies.
[…]
Consider: co-creating non-imperialistic, multi-cultural or domestic agendas for community or global scale aesthetic endeavors. Consider: the continuous re-invention of non-hierarchical telecom networks that will allow people to bypass cultural gatekeepers and power brokers. We must accept these kinds of challenges and recognize what can be gained by solving them.” 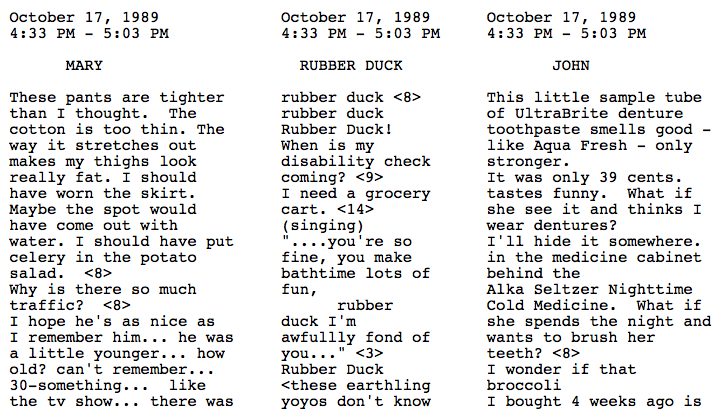 THIRTY MINUTES IN THE LATE AFTERNOON by Judy Malloy 1990

Thirty Minutes in the Late Afternoon is a collectively authored narrative created in the early Internet forum THE WELL starting from a given theme: “3 characters John and Mary were preparing (separately) for their first date. The third character, a street person known as Rubber Duck for his habit of constantly muttering the words “rubber duck” was sitting on the steps of the Museum of Modern Art. The time frame was the 30 minutes preceding the 1989 earthquake in San Francisco.“

ClearBoard, a work of HCI design research by Hiroshi Ishii and Minoru Kobayashi, “is designed to integrate interpersonal space and shared workspace seamlessly. A design goal of ClearBoard is to allow a pair of users to shift easily between interpersonal space and shared workspace using familiar everyday cues such as the partner’s gestures, head movements, eye contact, and gaze direction”

Paul Sermon’s Telematic Dreaming (1992-1993) “is an installation that exists within the ISDN digital telephone network. Two separate interfaces are located in separate locations, these interfaces in themselves are dynamic installations that function as customized video-conferencing systems. A double bed is located within both locations, one in a blacked out space and the other in an illuminated space. The bed in the light location has a camera situated directly above it, sending a live video image of the bed, and a person (“A”) lying on it, to a video projector located above the other bed in the blacked out location. The live video image is projected down on to the bed with another person (“B”) on it. A second camera, next to the video projector, sends a live video image of the projection of person “A” with person “B” back to a series of monitors that surround the bed and person “A” in the illuminated location. The telepresent image functions like a mirror that reflects one person within another person’s reflection.” (Paul Sermon)

In The Trace (1995), an interactive installation by Rafael Lozano-Hemmer, a participant encounters the moving, ghostlike “presence” of another person, who is located in an identical but separate room. Their presence is conveyed by a glowing spot created by a pair of intersecting beams of light.

Ken Goldberg & Joseph Santarromana’s TeleGarden is an art installation that allows web users to view and interact with a remote garden filled with living plants. Members can plant, water, and monitor the progress of seedlings via the tender movements of an industrial robot arm.  The Telegarden was developed at the University of Southern California and went online in June 1995. In its first year, over 9000 members helped cultivate. In September 1996, the Telegarden was moved to the lobby of the Ars Electronica Center in Austria, where it remained online until August 2004. 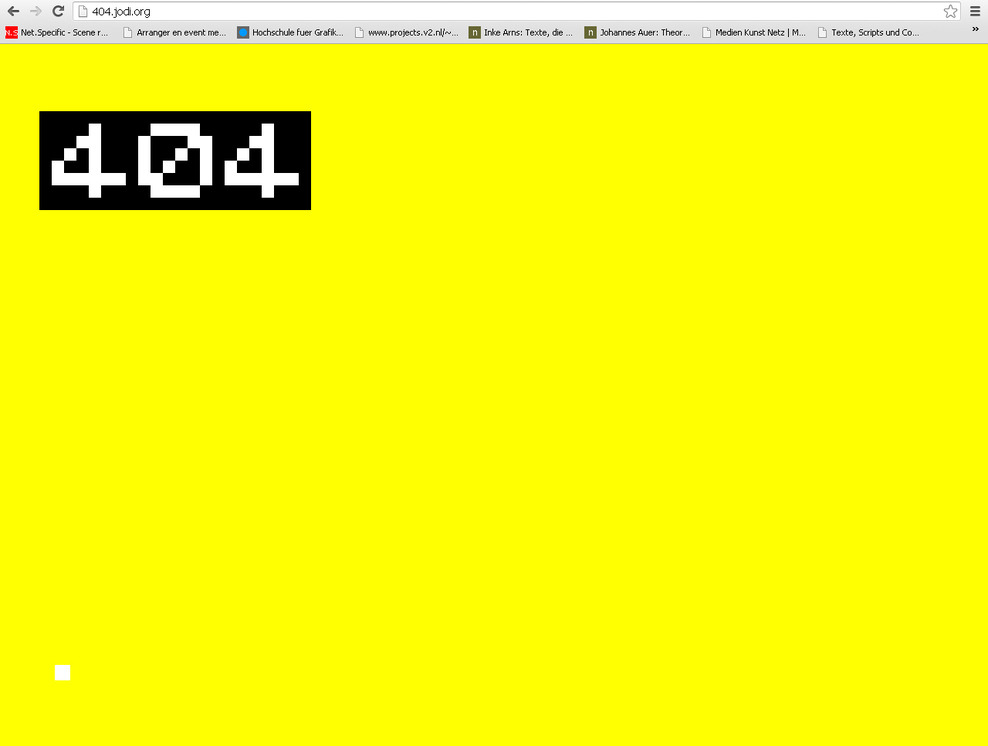 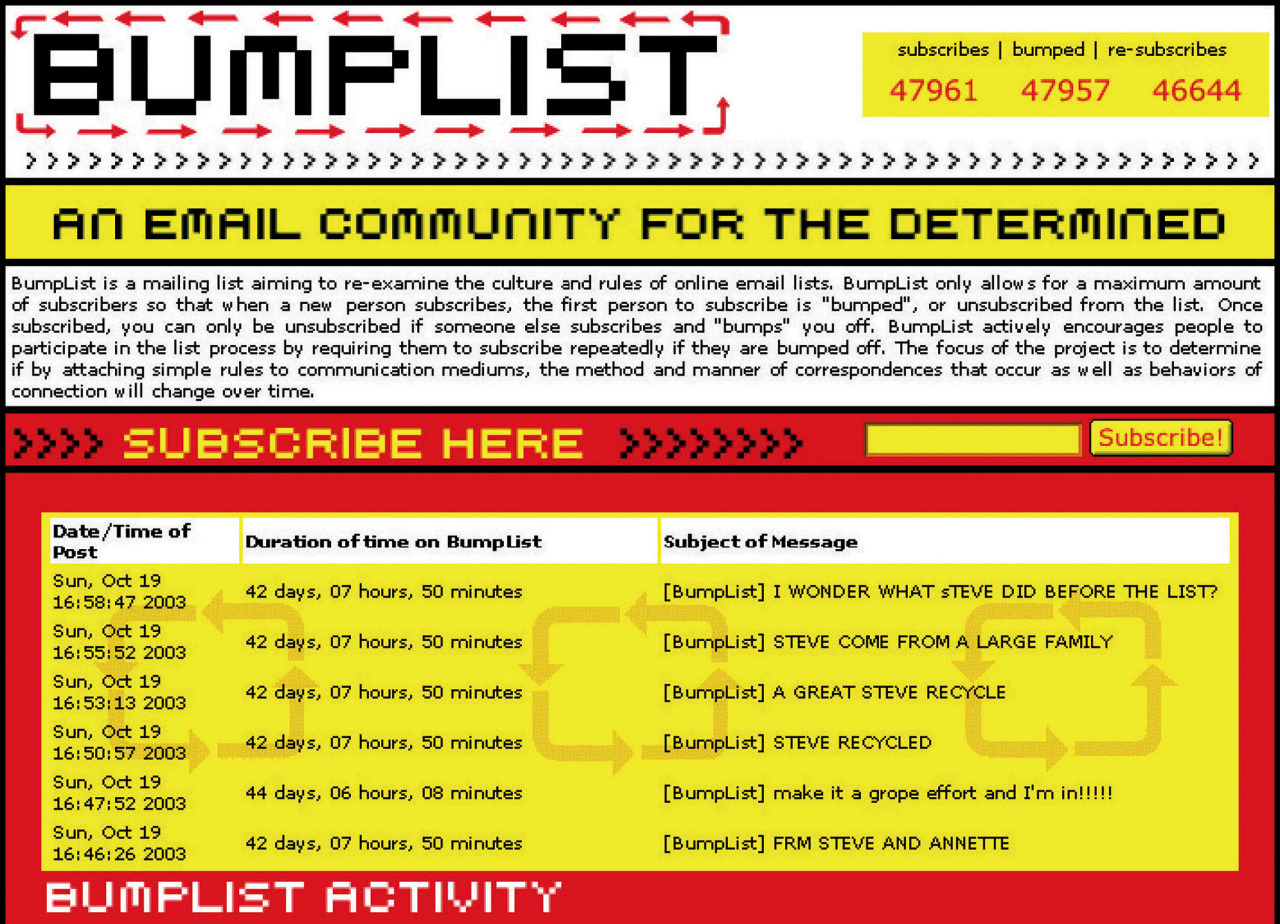 Bilal, Wafaa. Domestic Tension (2007). Viewers log onto the internet to contact the artist, or to shoot him with a paintball gun. 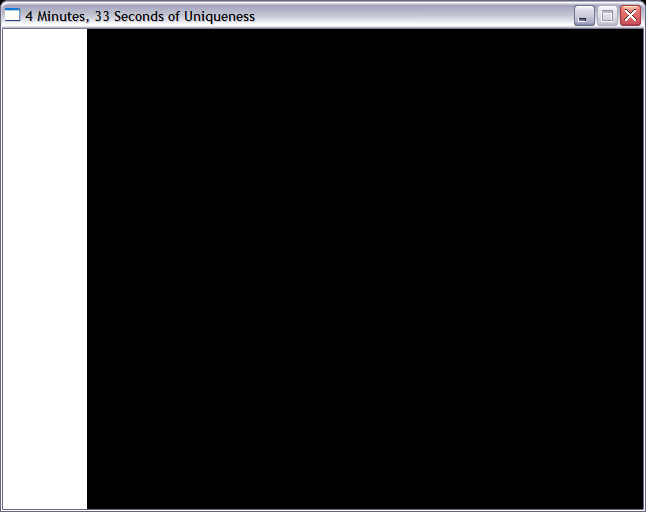 You win the game if you’re the only one playing the game at the moment in the world. The game checks over the internet if there are other people playing it at the moment and it kills the game if someone else is playing it. You have to play the game for 4 minutes and 33 seconds as an homage to John Cage. 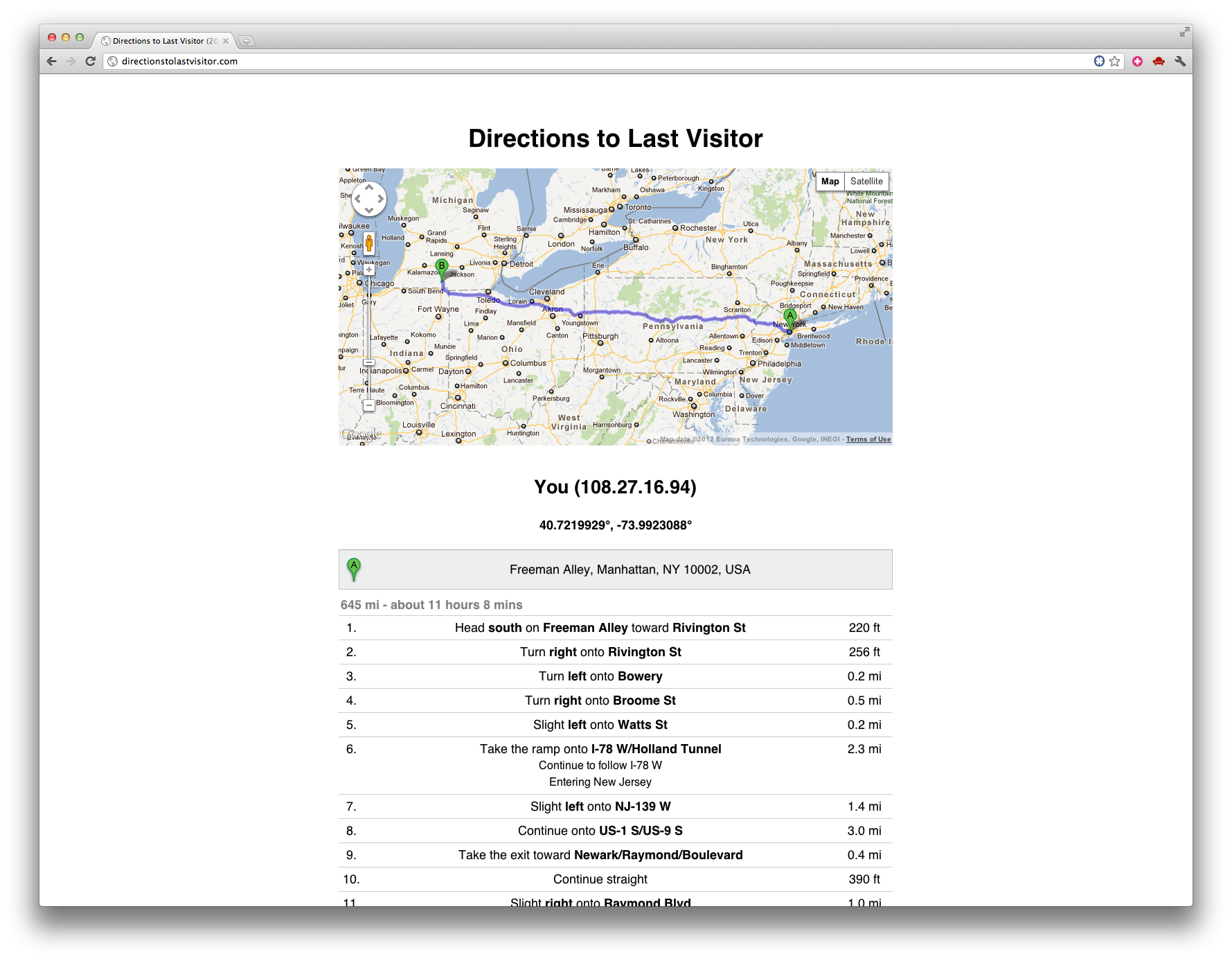 Lauren McCarthy’s Social Turkers (2013) asks: “What if we could receive real-time feedback on our social interactions? Would unbiased third party monitors be better suited to interpret situations and make decisions for the parties involved? How might augmenting our experience help us become more aware in our relationships, shift us out of normal patterns, and open us to unexpected possibilities? I am developing a system like this for myself using Amazon Mechanical Turk. During a series of dates with new people I meet on the internet, I will stream the interaction to the web using an iPhone app. Turk workers will be paid to watch the stream, interpret what is happening, and offer feedback as to what I should do or say next. This feedback will be communicated to me via text message.” (McCarthy)

Studio Moniker’s Do Not Touch (2013) [live version here] is a music video created from the crowdsourced movements of its viewers’ cursors. 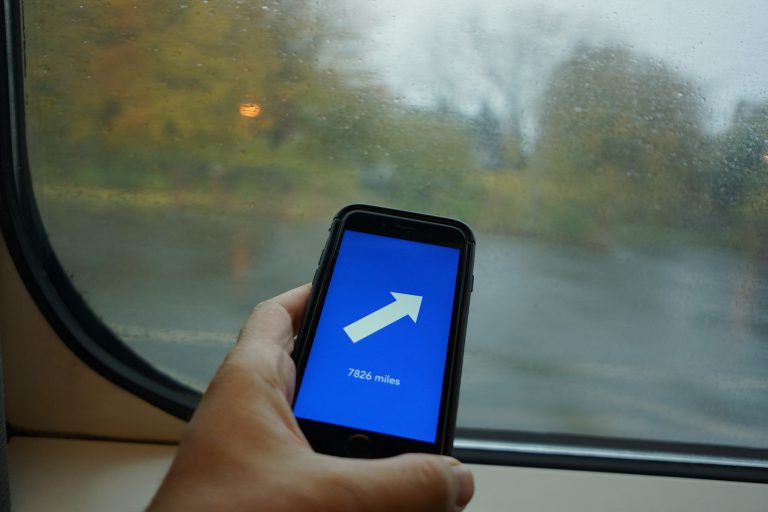 the space between us (2015) by David Horvitz is an iOS app which connects two people’s phones. Once connected, the app displays the distance and direction to the other person. 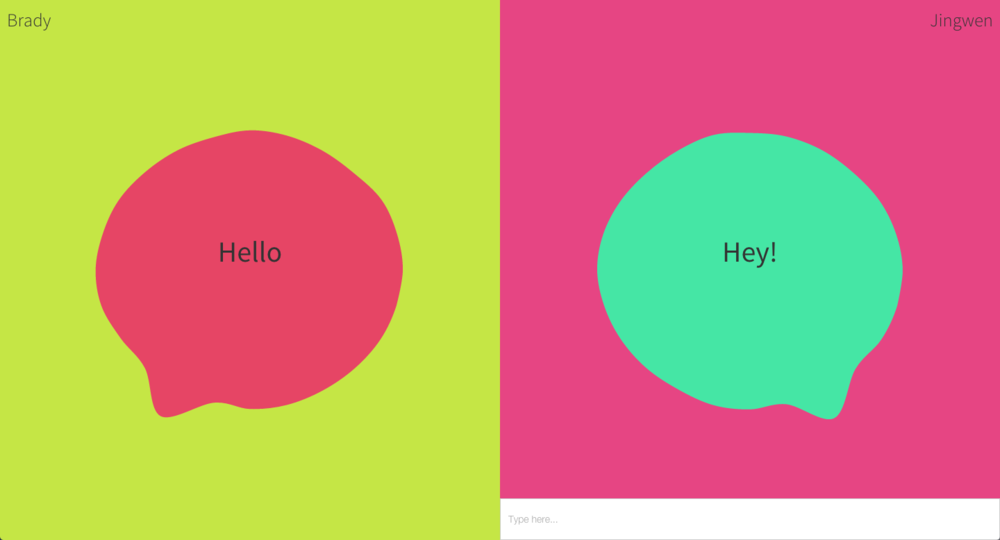 Jingwen Zhu’s Real Me (2015) “is a chatting app with BLE connected muscle sensor, pulse sensor and vibration sensor. It tracks the user’s emotion while chatting and using system messages to tell the ‘real emotion’ of the user. Sensor readings also draw out geometric motion graphics as the background of the chatting room. The user’s heart rate is mapped to the color of the speech bubble, their smile triggers the particles of the window, and leg shaking triggers the shaking of speech bubbles.” (Zhu)

Dries Depoorter and David Surprenant developed Die With Me, a chat app you can only use when you have less than 5% battery. “Die together in a chatroom on your way to offline peace.”

Telepresence is more compelling if it involves creation