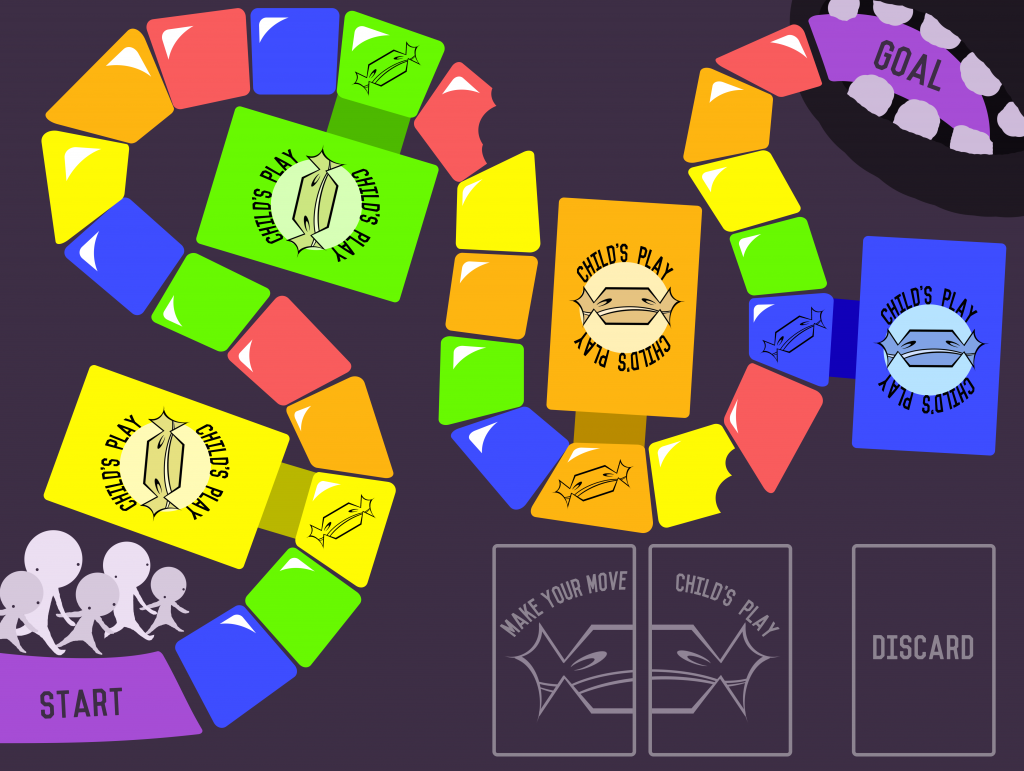 Candy Land: The Game of Sweet Revenge encourages players to act out against the confines of traditional board game etiquette. Players eat, lick, and bite each other’s candy game pieces while trying to shuttle five of their own to the safe zone at the end of the rainbow path. Winning means a feast of all the candy on the board you can steal, but revenge plays can drop the leading player into last place. Players take turns choosing the most advantageous color combinations from a hand of color cards to move their candies to the end. If they land on another candy, moving either backwards or forwards, they can steal that candy for themselves. Candies are only safe once bitten into/licked, or once they have reached the end. By moving along the board, players activate mini-games like candy-hide-and-seek, in which players steal a neighbor’s candy and hide it on their person. Each turn players get to guess where their candy ended up, and only after finding it does that candy go back into play. These subgames, in combination with stealing and revenge mechanic, bring strategy and complexity to a once frivolous, quiet game. 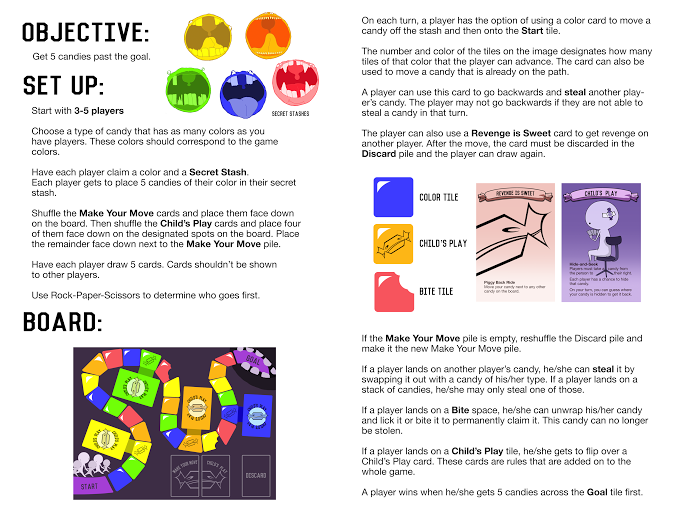 Candy Land is a game that teaches children the etiquette of board games. The system uses a universally child-appealing subject matter, candy, as flattening flavor and has enough color to hold a toddler’s attention long enough to have them be still and quiet for a 15 minute game. The aim of Candy Land: The Game of Sweet Revenge is to thwart the indoctrination of the original game. The revision reaches a player’s inner selfish, antagonistic bully and reinforces socially unaccepted behavior with the same candy that made the original game so innocent.

The theme of greed was instituted with the choice to play with actual candies and the steal mechanic. Physical candy adds a depth of motivation to the game and a painful edge with which to wound other players. Candy makes the game serious, turning it into a battle of tangible resources, not just points or positions. This meant the pain and satisfaction of revenge also had to be present in gameplay. Stealing, originally done by playing one of the many steal cards in the deck of colored square cards, gave players that satisfaction. The cards were scrapped in favor of landing on the same space another player occupies. This adds gestural depth to the game, and actually taking away another’s candy forces the stealing player to act out their greed, loosening their control over their inhibitions, until by the end of the game, play has devolved into a messy, polar experience.

A side effect of stealing was that a single player could be ganged up on and quickly run out of candies or be left powerless. To prevent this from happening, “blue shell” cards were added to the color square deck. These “Revenge is Sweet” cards had the potential to wildly swing the game from one losing state to another. Still, players would occasionally end up losing their candies or would give up if they couldn’t draw a comeback card. To combat this, a risk-reward subgame system was implemented in the Child’s Play cards. Each initiated a game a small game related to traditional children’s games. like hide and seek, to be played in the midst of the central game. This would help a down-on-his-luck player make a triumphant comeback or sacrifice himself for another player. These subgames ended up introducing a lot of downtime each round, but this was unavoidable in strategizing the game. Egging another player to move faster ended up enhancing the childish, peer-pressure like experience and was a retained element.

Most playtesters found the subgame structure to be entertaining, even if it slowed the round. The game did not appeal to all personalities and did not equalize every type of player to a “child” state. For example, the Hide-and-Seek subgame, in which players hide their neighbor’s candy somewhere on their person and take turns guessing where that candy went, had a general consensus of being “gross.” While most players preserved their dignity by expressing this opinion verbally, the first locations guessed were almost always the most vulgar ( i.e. Is it in your butt? Is it in your bra?) This pseudo-disgust also carried over into the discovery of the candy, which was almost never consumed once a player knew where it had been. Eating that candy became a mark of commitment to the game, and a show of how willing a player was to win by intimidating the others. The humor of the visual flavor (in the illustrations, layout, icons, and descriptions on cards) was noted by most of the playtesters as positive and a definite perversion of the original, kitschy designs of the original game.

Overall, the game was received positively, with players mostly having issues with the physical layout of the board, something that was addressed in its final version. 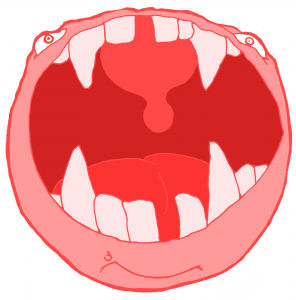 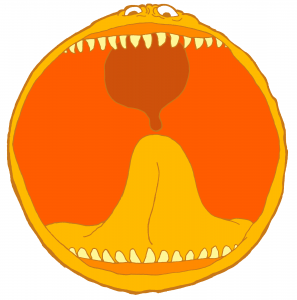 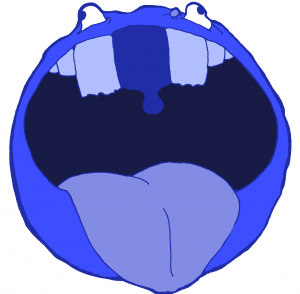 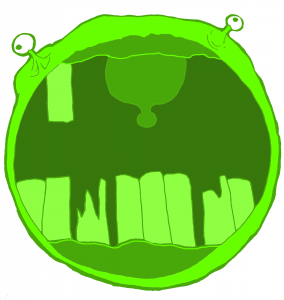