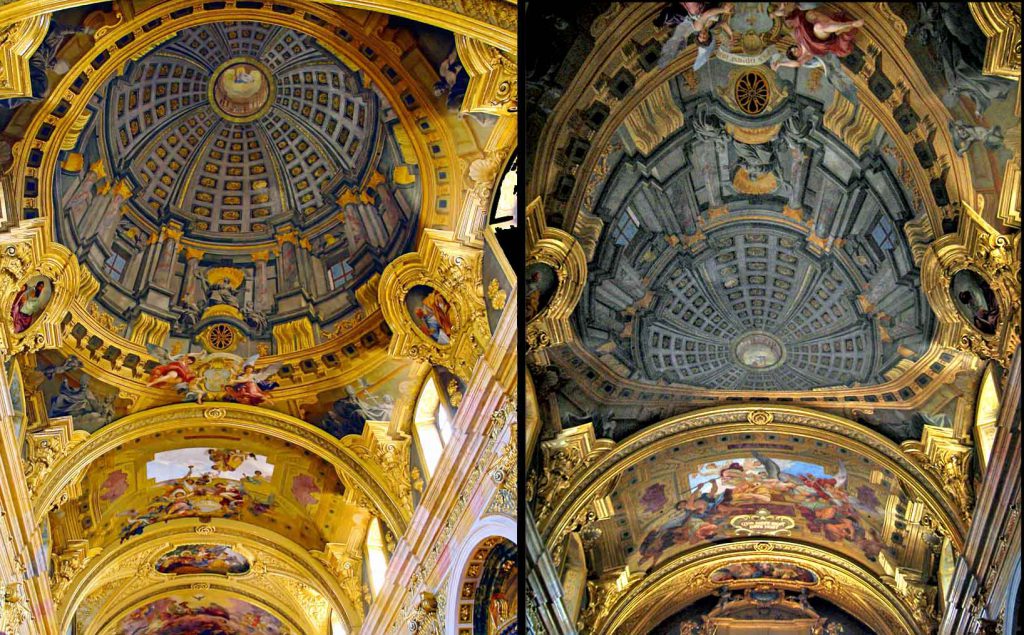 Beyond frescoes, Baroque architecture as an immersive experience

Compare with a Romanesque or Gothic interior

German opera composer Richard Wagner believed that the future of music, music theater, and all the arts, lay in an embrace of Gesamtkunstwerk or total artwork, a fusion of the arts that. Opera served as a vehicle for the unification of all the arts into a single medium of artistic expression. The Festpielhaus (Festival House) Theater opened in 1876 in Bayreuth, Germany, where Wagner applied his theatrical innovations including: darkening the house, surround-sound reverberance, and the revitalization of the Greek amphitheatrical seating to focus audience attention on stage. This approach to opera foreshadowed the experience of virtual reality, immersing the audience in the imaginary world of the stage.
–Multimedia: From Wagner to Virtual Reality

Apparatus for the display of 360 painting, including

“[Robert] Barker’s innovation was rather in the viewer’s interface with the image. The panorama was an apparatus that would isolate and control what it was possible to see. His specifications included lighting from above, an isolated central viewing platform exactly halfway up the height of the canvas, restrictions on the viewer getting too close to the picture, entrance from below, and ventilation without windows. The edges of the image were covered by a canopy that, at the top, also hid the source of light. Barker wasn’t taking the picture out of the frame, he was making the frame big enough to include the spectator as well.”
link 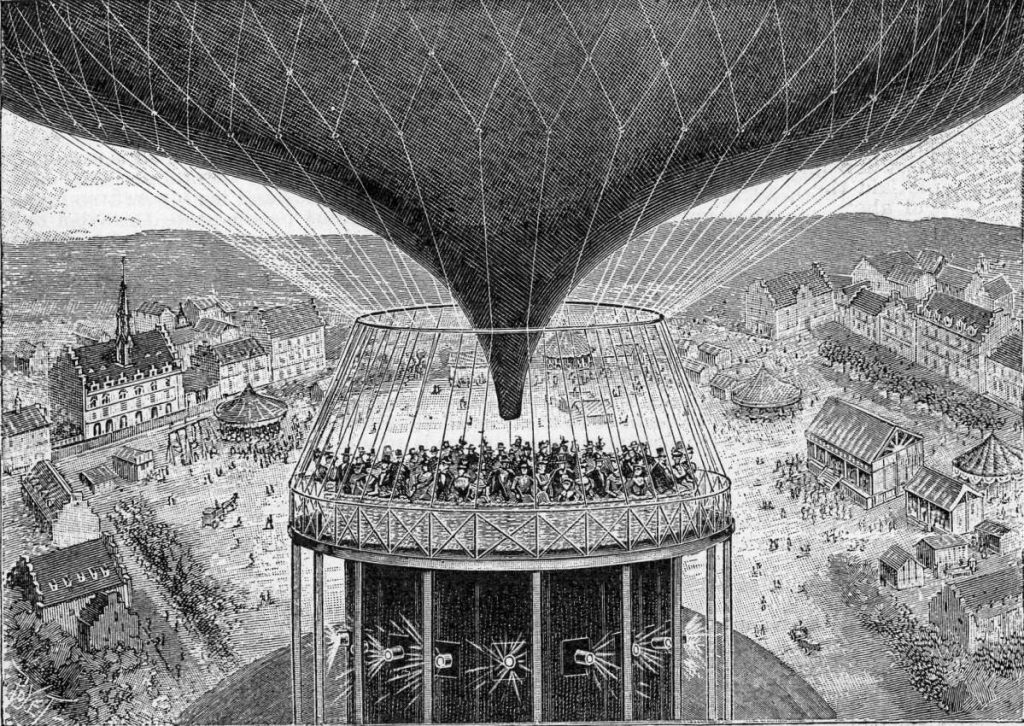 Simulated a ride in a hot air balloon over Paris. 10 synchronized 70 mm movie projectors, projecting onto 10 9×9 metre screens arranged in a full 360° circle around the viewing platform. Presented at the Paris expo, lasted 3 days before it was shut down due to safety concerns.

And Viewmaster is still popular today.

The Power of Love is the first (now lost) 3D movie from 1922. It used and red-and-green anaglyph system. Viewers were also given the option to choose the ending of the film by looking into either the red or green lens, portraying either a happy or tragic ending.

“When the people are amusing themselves, they do not think about politics”
-Tivoli founder Georg Carstensen (1812 -1857) 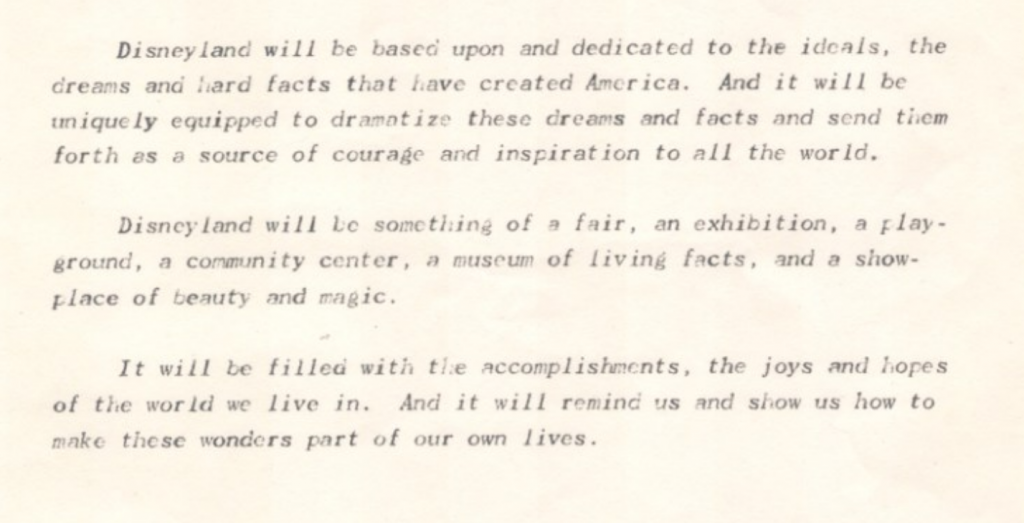 But also the place where a lot of immersive entertainment technologies are deployed first. 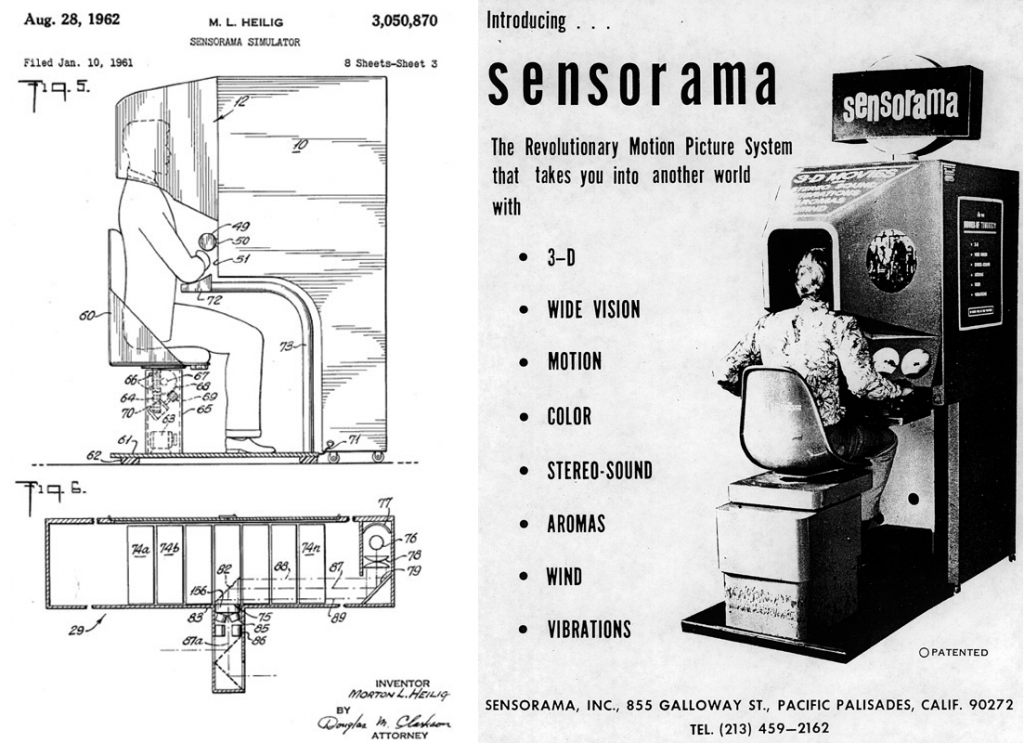 Mechanical device by Morton Heilig. Only one prototype was made.
He wrote “The Cinema of the Future” 1955 an essay arguing for a scientific method for the arts based on the integration of sensorial stimuli.

Future Cinema is an “art of consciousness” and not just a visual art.
Five senses ought to be replicated in the way they are naturally used, to provide a total illusion of reality: Sight: 70%, Hearing: 20%, Smell: 5%, Touch: 4%, Taste: 1%
You can read the sensorama-the-cinema-of-future-morton, it’s bonkers

BUT it directly inspired VR and Telepresence pioneers like Scott Fisher.

Origin Story:
Ivan Sutherland was visiting Bell Helicopter, an aircraft manufacturer in Fort Worth, Texas. The company was working on a device to help military helicopters land at night: a headset that allowed pilots to direct a camera on the base of the helicopter, capturing infrared images that appeared simultaneously on tiny screens in front of their eyes.

Bell Helicopter tested the device by asking an employee to sit in the office and wear a prototype while watching two colleagues play catch on the roof above. When one of them suddenly threw the ball at the camera, the employee in the office ducked.
financial times

“It was clear the observer thought he was [behind] the camera and not comfortably safe inside the building,” Sutherland recently recalled. “My little contribution to virtual reality was to realise we didn’t need a camera — we could substitute a computer.”

from the Financial Times

His short essay The Ultimate Display from 1965 envisions many of the technologies that we now take for granted and much more:

The Ultimate Display with notes by Bruce Sterling

Coined the term “Artificial Reality”, made some of the first interactive installations including Videoplace (1972-1990s), the prototype of all gestural interfaces based on computer vision (kinect, interactive “mirror” installation) and room-scale HCI.

“I saw the encounter between human and machine as the central drama of our time”,
What Should You Wear to an Artificial Reality – Myron Krueger, 1991

First game that got the attention of the US Army.
They commissioned a modified version of the game to Atari, for training purposes. It was called Bradley trainer (the Bradley is like a small tank).
It stayed on a prototype stage but it may have served as a proof of concept, because in the ’80s the Army fully embraced immersive simulations for training.

A network of simulators, basically the first MMORPG

Developed by NASA, showcased at the Consumer Electronic Show. Used a data glove and was meant to be also used for telepresence (controlling robots). 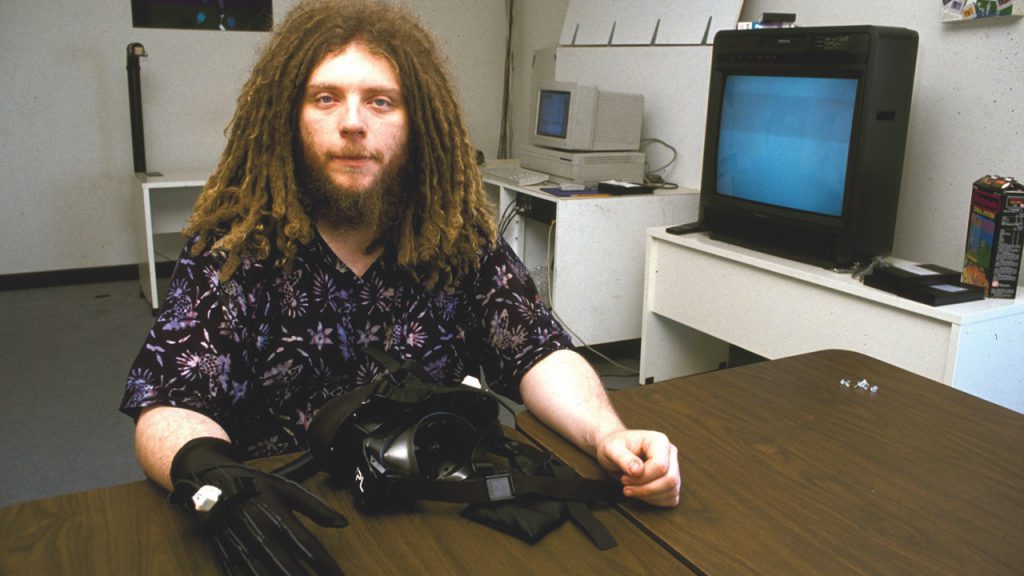 Jaron Lanier coined the term Virtual Reality in the current sense. His company VPL held the patents for the classic goggles ($49,000) and “data glove” ($9000). (Multiply the prices by 2 to get an idea of the cost today)

The “big players” attempt to ride the wave. VR in the military, PTSD reenactment, 2009 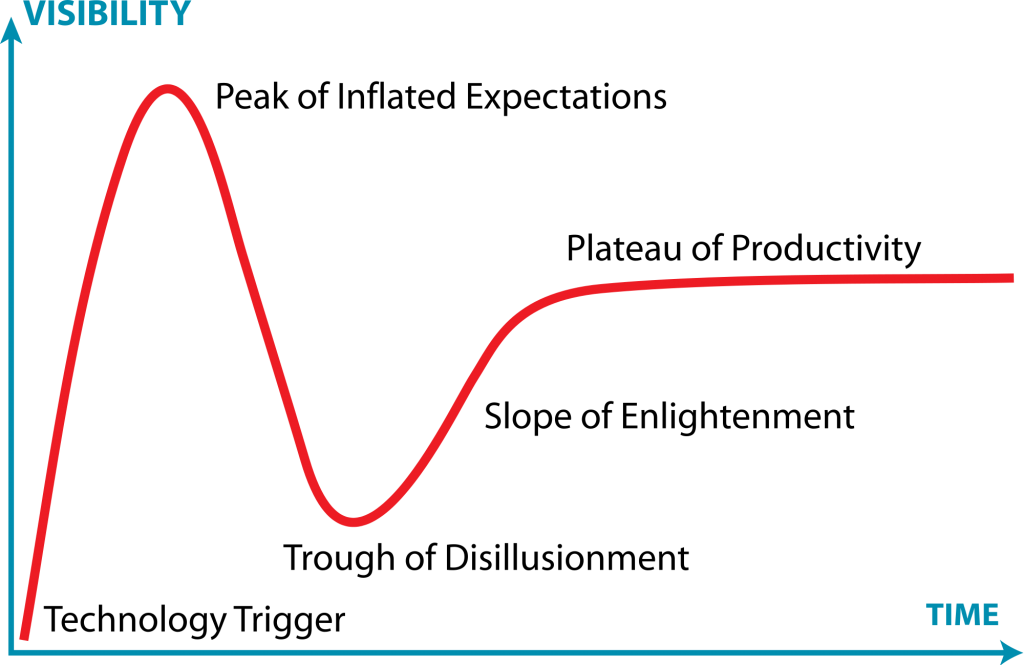 But sometimes you don’t get to the plateau, unless we are still in the slope of Enlightment…

In the mid 90s videogames race toward realism while the tech sectorm with the commercialization of the world wide web and the introduction of browsers, shifts toward the internet (dot com bubble 1995-2001).
Networking becomes more important than “immersion”. Some early ideas of social VR that were left in the backburner re-emerge but without expensive headsets.

Based on the VRML language, the HTML of 3D web