Many practices from film production can be applied to the creation of shorts, video art, animation and documentary video.

As artist and DIY producer, assuming you already did all the research and already have an idea, you want to go through a few phases of preproduction.

A treatment is a document that presents the story idea of your film before writing the entire script. Treatments are often written in present tense, in a narrative-like prose, and highlight the most important information about your film, including title, logline, story summary, and character descriptions.

Exercise:
Start fleshing out the super generic prompt. Turn it into a more specific synopsis.

Define the instigating event/object.
What’s the expressive goal in terms of mood and audience reaction? (comedy, suspense, romantic, sci-fi…)
What’s the unusual object/situation? Is it prop? A special effect? A character? Make sure you can set it up for the shooting.

Define the protagonist.
Since we can’t do casting, you can model them after your pre-designated actor.
Answer these questions on a document:

What do they want? What’s their motivation or starting point?
What’s their reaction to the instigating event?
Who are they? (gender, race, wealth, job, ideology… )
What’s their background/backstory?
What are their personality traits? Write as many descriptive words ( blunt, subtly manipulative, talkative, etc)
What’s the character-defining moment that reveals some aspects of their personality and background?
E.g. a messy student in a comedy could be late for class bumping into people and dropping papers. A rich protagonist could well dress and drinking Champagne… the location can also define a lot of the background.

Since you can’t make your set from scratch you need to rely on existing locations. In professional film production there are catalogues and listings. You are more likely to write your script around a location accessible to you.
Here’s a checklist of things to consider:

> overall aesthetic – does it match your writer’s dreams
> availability – public spaces should be ok, private will need scheduling
> accessibility and safety – don’t break into empty warehouses please
> access to power – if you use lights etc
> neatness – can the place be easily decluttered to avoid unnecessary details?
> size – small interiors can be especially challenging, that’s why most movies are shot in sets
> natural and practical lights – the existing fixtures, windows, sun and shadow
> sound – is it noisy? What kind of microphone do you need

Exercise:
Together. Think about an accessible location on or around campus. Assign one team member to location scouting for next class.

Describe , the movement, actions, expression and dialogues of the characters.

The format is structured so that one page equates to roughly one minute of screen time. 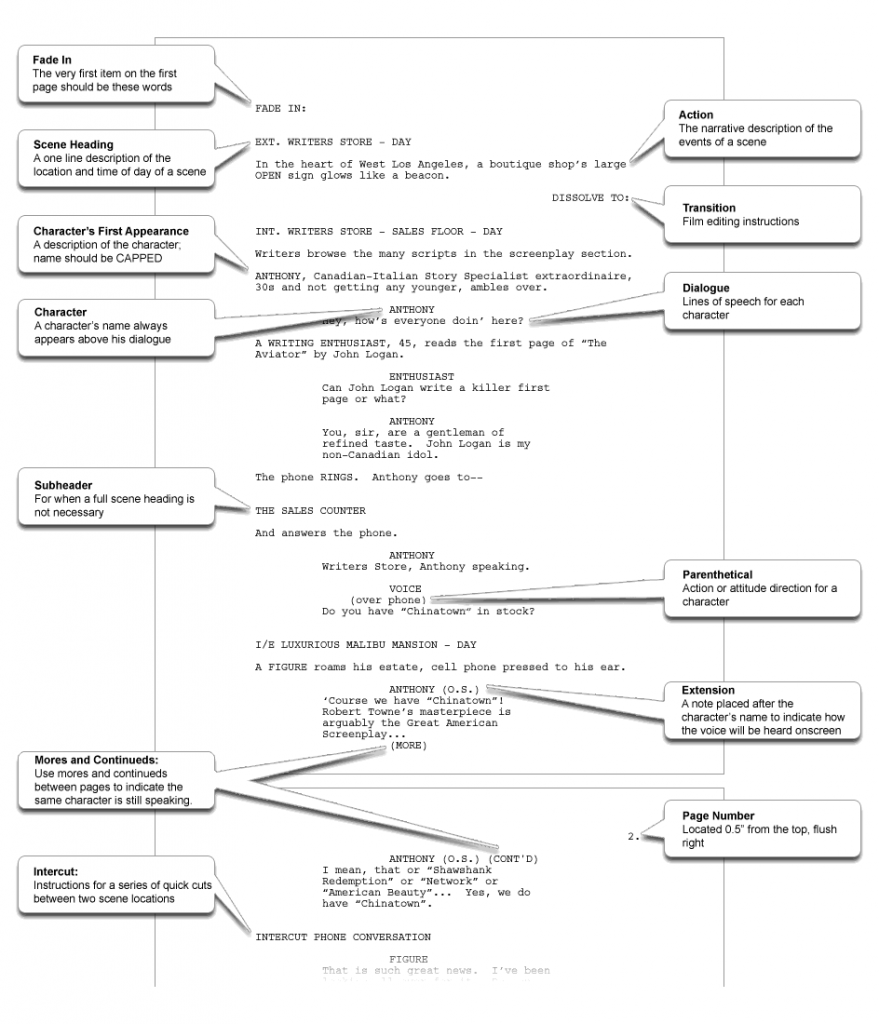 You can find a lot of actual screenplays online like this one: eternal_sunshine_of_the_spotless_mind.pdf

Exercise/assignment:
Your screenplay may not have any dialogues but still try to stick to the standard format.
You can assign a team member to writing the script

A storyboard is a shot by shot visual representation of your video.

They are usually in black and white and hand drawn: 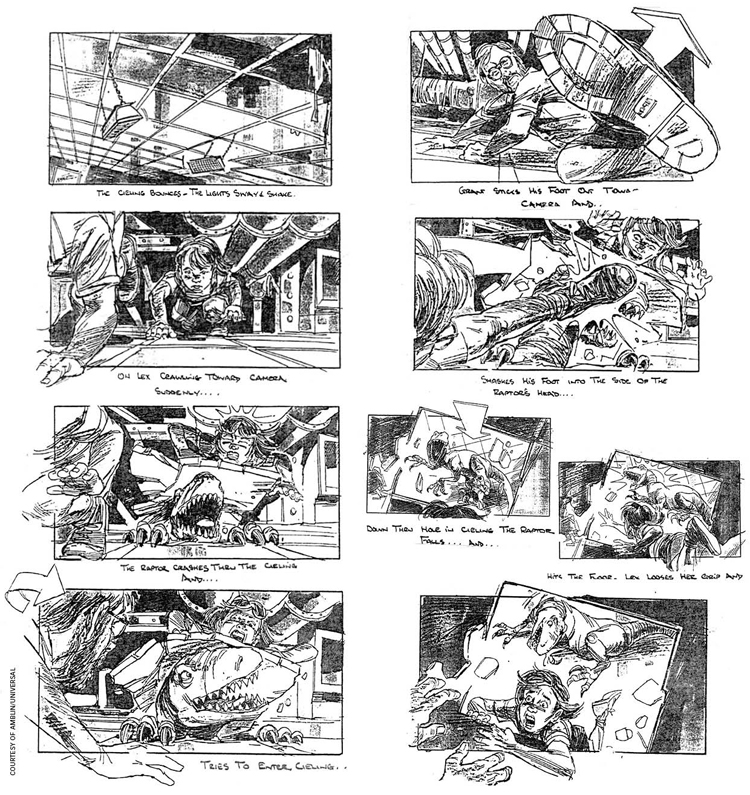 They don’t have to be beautifully drawn and detailed like a comic but they should provide information about camera angles, volumes, perspective and expressions – so no stick figures. 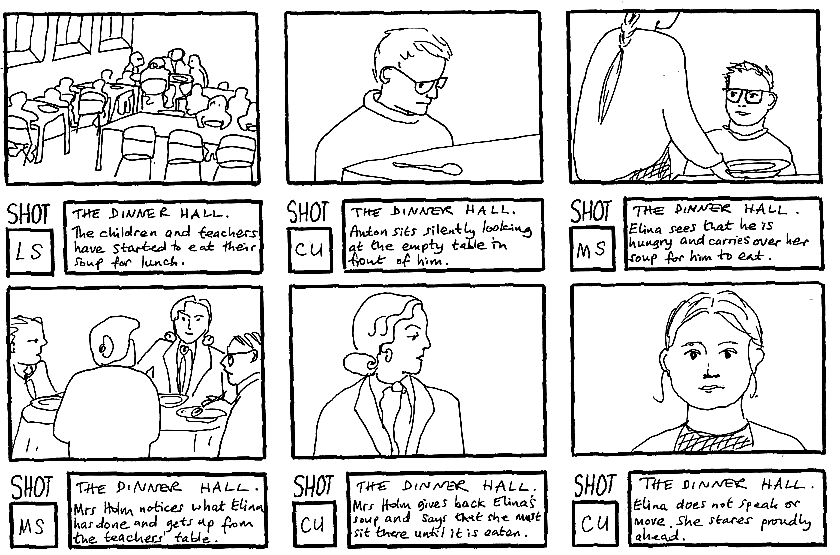 In animation they can get very detailed and contain information about timing. They can also be synched with rough voices (animatic).

Actor’s and camera movements in the scene aka blocking is roughly defined in the storyboard but it can be tweaked and rehearsed on location since it may depend on set physical features.

Exercise/assignment:
When the screenplay is complete and you have a location, sketch out your short shot by shot. You can assign a team member on this task but make sure the whole team as a say on it.
Keep in mind things may change when you are on location.

Films and video are rarely shot in chronological order for a variety of reasons.
Generally you need to turn your storyboard in a shot list of every single planned shot and then draft a shooting schedule in which each shot is listed in order of production.
This is the kind of information you want to include: 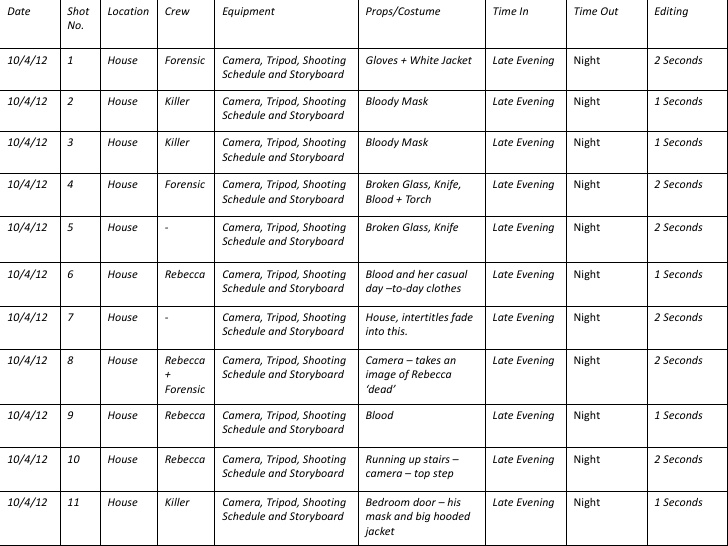 Documentary filmmaking is more improvisational since the “story” can take unexpected turns and new elements can emerge during production.

Exercise/assignment:
Designate a “producer”, they will be in charge of compiling the shooting schedule, renting the equipment and finding props and costumes, if any.

Costumes can be normal clothing, just don’t use anything with thin stripes or busy high contrast patterns. Non-patterned brightly colored clothes are probably the best. Also make sure it stands out from the background (eg. avoid wearing black on a black background)

Before shooting, let’s go through the most basic requirements.

> Actors need to do the same action and say the same line in different shots and different takes.
If the scene involve opening a door and sitting down you have to film the exact action over an over from all the possible angles so the editor can choose where to put the cut.
Pay attention to each gesture, down to which foot the actor uses to step into the room.

> Shoot the master shot first, and mid-shots and close-ups later.

> Shoot multiple takes. Usually the director decides when to move to the next shot, during the shooting of Eyes Wide Shut, Kubrick asked for 97 takes of Tom Cruise walking through a door before he was satisfied.
Just make sure you have you have a variety of takes to choose from.

> Shoot a lot of B-roll (close up, details, environment) you can use as band aid or connection between shots (insert shot)

> Rehearse the blocking of the scene a couple of times.