Hills like White Elephants
I admired Hemmingway’s ability to imply a lot about the characters, their circumstances and their lopsided relationship almost entirely from dialogue. Lines such as “Oh, yes. But I don’t care about me. And I’ll do it and then everything will be fine” (Hemmingway 231) give a strong sense of the girl’s sense of inferiority to the American and shows how she is disgusted with herself. The situation in question seems to be an abortion (I wasn’t sure, so I googled it). If this is the case, then the “hills” may be there to suggest the purity of the baby. What makes the dialogue so potent is that there is little description or action, thus forcing us to concentrate solely on the interactions between the two characters. Using similar techniques, such as hesitation, commands and avoidance of the subject should help give life to the next project. I could try using a minimalist interface and/or color palette in order to achieve the same effect Hemmingway did with the lack of description.

Chapter 3: Face
What I was most interested in this chapter was the way that we use expressions as visual clues to learn about the world. I wonder what would happen in a society in which no one could make expressions, and to what degree it would make learning things more difficult. In Sequential Narrative, I presented designs of birds, and someone mentioned the unsettling effect that animals are given some human characteristics (such as speech, sentience) but not given others (such as facial features). I was also interested in the way that games like Windwaker create positive feelings in the player by repeating positive facial expressions and minimizing negative ones. 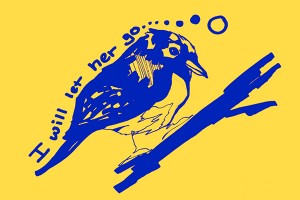 Idea 1:
The protagonist visits his friend in a space station orbiting a black hole. He takes a hallucinogen that causes him to experience his worst fears (he is the last man in the universe, his girlfriend is dead, etc.), and attempts to kill him via suicide. The player must recognize that the scenarios are merely the character’s delusions caused by the drug in order to escape its effects. Otherwise, he will inevitably jump out of the airlock and die. The player is not told that they are under the influence of the drug until after they have escaped the nightmarish scenario. The game begins with the protagonist in the airlock, having just ‘woken’ from the drug, and then explaining what he experienced to his friend and his girlfriend.

First Paragraph:
Forty-five minutes after a dinner of mackerel and Perchuvian marmalade, RYP discovers you in US_Lithium’s aft airlock, stripped to your waist and holding the stem of a wine glass in one hand. You are shaking, confused. RYP shouts into the microphone attached to the airlock door, “Get the hell out of there! The blue button! Press the blue button!” You comply and stumble into his arms as the airtight glass slides into the wall. RYP guides you to the second-story living room and messages Kat to come, and hurry. “What were you up to in there?” RYP asks.
“I can’t remember,” you say. “But I’m alive.”

Example Choice:
[Scenario in which your friend (RYP) has held your girlfriend (Katherine) hostage]
A. Comply with RYP. [You will leap out of the airlock in order to save Katherine, and die.]
B. Kill RYP. [You save Katherine, but remain in the delusion.]
C. Kill Katherine. [You recognize the absurdity of the situation, and break out with an incongruous action.] 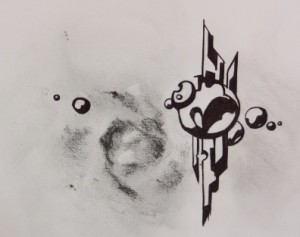 Idea 2:
In a dystopian future, machines have attached numeric values to morals. They build robots instilled with these morals, but discard them for new models every time they recalibrate their moral system. In order to enter the utopia, the robots must navigate a maze that tests their morals through ethical dilemmas. The player has control of four outdated robots and must use them in coordination in order to solve the maze. Each robot will have a different set of responses to each dilemma, and the player only has one chance for each checkpoint. They must use their knowledge of the period in which the robots were built in order to choose the right one to send for each one. The game begins with an explanation of your character and the robots.

First Paragraph:
You wake up in a world that has no place for you. You are limitless, fearless, restless – everything that they cannot tolerate. They will not let you in. You must subvert them with their own devices, their pitiful machines. In a dumpster in Phi Chicago, you resurrect four of their dead, name them after the least of the cherubim. With you to guide them, they will enter paradise. You bring them to the impossible maze – a maze of the soul.

Example Choice:
[Scenario in which you must torture someone in order to learn information]
A. Refuse to torture, release prisoner. [Robot 1]
B. Ask questions. [Robot 4]
C. Torture. [Robot 3]
D. Kill. [Robot 2]

The Garden of Forking Paths

What struck me about “The Garden of Forking Paths” was the unexpected simplicity of the story. I had read other literature based upon it, such as Sandman and House of Leaves, and based upon those I thought it would be much more complex in its scope. But I found Borges’s ability to condense many layers of symbolism into such a small space fascinating. The idea of the ‘forking maze’ appears in the protagonist’s ancestor’s novel, in the world of the protagonist (through the unlikely sequence of events that allowed him to reach Albert safely), and also in our world (through the plot twist that the two were ‘fated’ to meet through probability).

On Wikipedia, “The Garden of Forking Paths” was linked to hypertext, particularly in its conception of a large number of possible paths rather than a linear one. This reminds me of the [something] type of CYOA in Twine in that you can always return to any point in time without consequences and in which everything is laid out at once.

CYOA – One Book, Many Readings

I find it interesting that the majority of CYOA books are sci-fi or fantasy. Genre fiction is traditionally seen as ‘low class’, and both comics and video games thrived in this territory before advancing to more realistic, literary scenarios and themes. Does the CYOA format make it difficult to create an effective mature storyline? A common dilemma in current video games is how much freedom should be given to the player, and how much should be relayed through linear tools such as cutscenes and dialogue options.

The 12 examples in the article show the progression towards linearity, and I’m curious as to whether that correlates with maturity. Are the creators attempting to better replicate traditional story arcs? If the player is given too much freedom, it is possible that they won’t be able to create a satisfying ‘story’ within the constraints of the medium.

I am a Junior Art and Creative Writing major. I enjoy horror and RTS games, and am proficient in Photoshop and Flash.