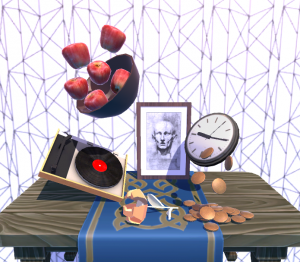 For this piece, I decided to try a hybrid of static and falling objects. During my first try on Monday, I tossed around the idea of actually putting colliders on everything and letting them fall as they may, so I figured this would be a good compromise. The coins, bowl, apples and table are from the tutorial assets, while I got the record player, picture frame, and clock from the Unity asset store. The background, I decided to texture an elongated cube as a sort of wallpaper.

The arrangement is similar to vanitas, but instead of including a skull, I went with a skull-like figure in the portrait. To relate to the passage of time, I decided to include a clock and record player, as well as the objects falling and coming to rest on the table; all indicative of how time passes.