1) What Did You Witness?

For this idea I was inspired by Paolo’s demonstration in class of creating characters from manipulated simple shapes.  But in this case, the player will be “designing” the character.  The game starts off with a pixelated background of a dark alley, a building, and a vague silhouetted figure.  Then Policeman Bob will show up to inform you that you have just witnessed a crime and need to describe the perp.  Policeman Bob will ask questions relating to the perp’s physical appearance, specifically: lower body type (boxy, round, v-shaped), lower body size (long, squat, proportional), upper body type (boxy, round, v-shaped), upper body size (long, squat, proportional), head shape (oval, rectangular, heart-shaped), head size (long, squat, proportional), gender, skin color, hair color, hair type (curly, straight, wavy), hair length (long, short, shoulder-length), clothing color, and shoe color.  At the end, the player will brought to the police station to identify the perp they described.  The player “wins” if he found identified the correct criminal. 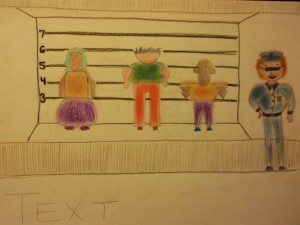 In this game, the player would be hiking and stumble under an “enchanted” forest with legendary animals.  He then gets to choose which animal he wants to follow and learn about , make friends with, or capture.  The three animals he can follow are a dragon, a unicorn, or a phoenix.  I want each of the three characters to have unexpected qualities: for instance, if the player decides to follow the unicorn, he always views it from the profile, and at the end he sees it head-on and it actually has two horns and is an evil, devil-type character. 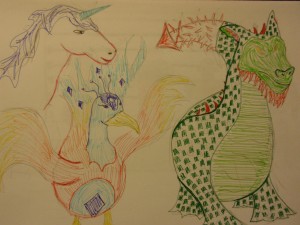