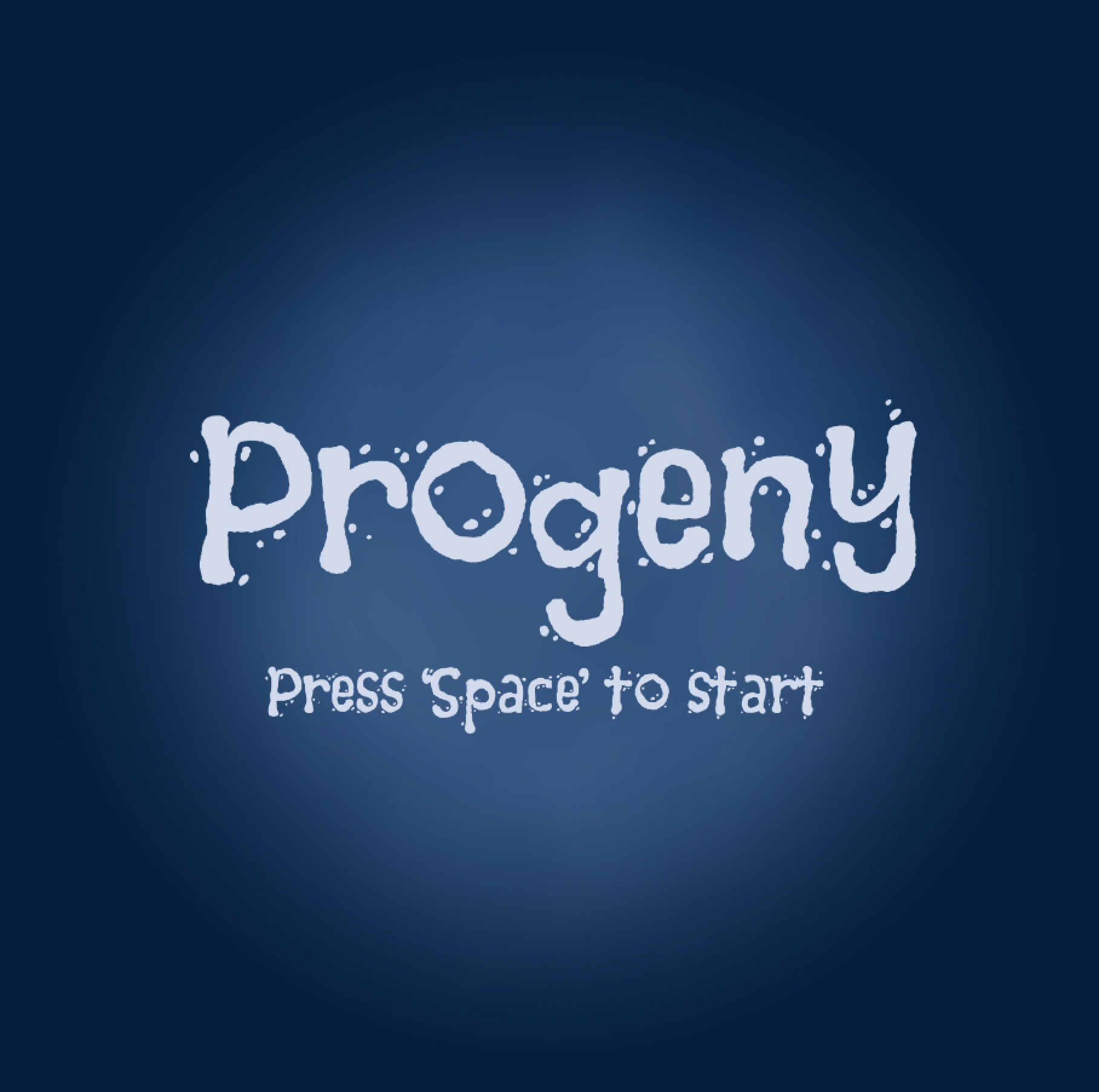 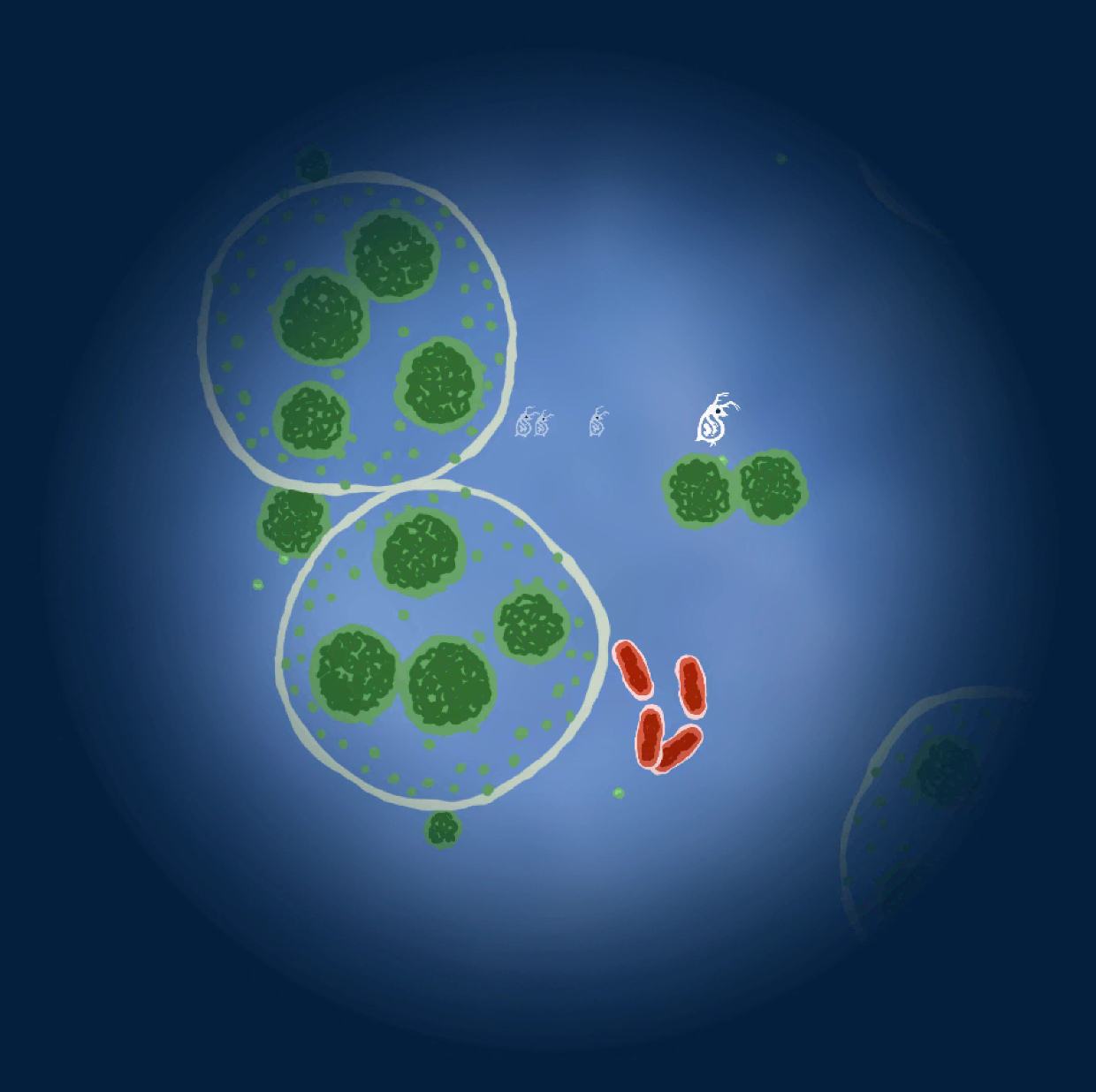 In this game, you play as a tiny, aquatic crustacean known as Daphnia. Using the arrow keys, you can explore the environment, eating tiny green algae in order to grow and maintain your energy. If you eat enough, you can produce some cute offspring that will follow you around and also try to eat and grow. Watch out though; there’s a persistent red bacteria that will prey on you and your family. Luckily, there is another friendly crustacean that can ward off the bacteria and shorten its chain. If you happen to die by malnourishment or predation, your oldest child becomes the new Player One. Through this game, learn to live the frenetic life of the humble Daphnia.

My game is still a work in progress.

It’s a one player game where you use the arrow keys to move a Daphnia through the circular space. The goal is to keep propagating your genetic code in this environment by eating small algae to maintain energy  and produce offspring. Your offspring will also try to follow you and eat the particles around you to grow larger. If you lose too much energy, you shrink and become slower until you finally die. Then your oldest offspring becomes the new player.

There is one predator in the system–an unrealistically large bacteria that preys upon the closest daphnia and grows a body part when it eats something.

Right now I’m struggling with making the game more engaging, so any advice is welcome. I added a download link below, but its a zip file containing the web player…

Things I might add:
1. Some actor that can break the bacteria chain
2. A better following behavior for the children

Questions that need answers:
1. How can I motivate the player to produce as many offspring as possible?
2. Are the velocity and size change mechanics clear?
3. Does it matter if the algae and bacteria don’t screen wrap?
4. What sounds or animations could make it nicer?
5. Why are the graphics such poor quality when I build the game?

The first game I tried out is called Nightmare Demo. It’s a shooting game where you try to defeat the minion bunnies and boss bunny in waves. My favorite parts about the game were the characters and satisfying feel of the machine gun attack.

The most dissatisfying part of the game was the little hole in the wall that lets you escape from harm. While you’re in there, all the bunnies freeze in place, but you can still kill them. It’s kind of like the disappointment of tag when you’re “it” and everyone loiters around base. 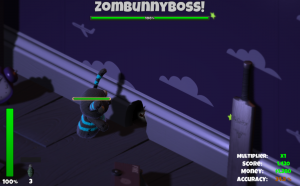 The second game I played was called Awe and it is a simple puzzle game. You have to find out the color pattern for the hidden triangles to unlock new colors. Each color corresponds to a sound, and the act of completing a pattern creates new landmarks. The game also has a collaborative mode, but I couldn’t really tell the difference since no one else was online.

As far as game feel goes, most of it is polish, but the act of selecting a color has a unique percussive effect. In addition, the theme of being a creator makes the experience more meaningful and uplifting. 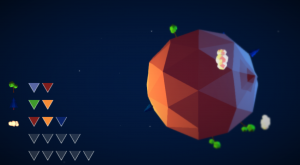 Assignment #51
Describe what to do with your body when you die.

Here is your chance to think about and describe what you would like done with your body after you die. Do you want to be buried in a cemetery, cremated and scattered in the ocean, composted beneath an apple tree? If you don’t make some decisions now, someone else will make them for you later. Feel free to be creative but try to make sure that what you describe for your final remains will be legal and really possible (not fantasy), so that your friends and family can actually carry out your wishes when the time comes. If there is a particular ceremony or activity that you would like to have accompany your final Good Bye, describe that too.

After I read a book about the process of making charcoal, I just really wanted to make charcoal from my bones. I also wonder if human bones can be ground with oil to make an Ivory Black pigment. I can’t be alive to see my bones used in such a way, so I would entrust my charcoal to my closest artist friend. Unfortunately, I don’t even know what kind of process I would have to go through to request this, so I’ll be happy if I am cremated and scattered on the top of a cliff at Cooper’s Rock or the seaside.

As for a ceremonial goodbye, I would be happy if my parents or sister were there to find closure. 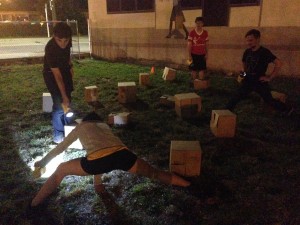 Rules: Light Fight is a four player game that can only be played in the dark. Each player is on a team with one other player, and the goal is to light up three of the four opponents’ feet. Each player has a flashlight and stands on four corners of a small field. Throughout this field are boxes that a player can step behind to hide his/her feet. On each turn, a player can either maneuver around with two steps, or take one step and flash a light. There is a judge to determine is a foot is considered “lit”.

My Experience: The games I played were rather short. You definitely have to be very attentive of the spatial arrangement and be aware of your own coordination. If the game was not collaborative, it could have been very detrimental to be focused on yourself rather than strategy. In addition, I liked how the body movements were very unique for this game, and how the flashlights made the mood somewhat intense and sneaky. However, because the definition of a “lit foot” is really subjective, there was a lot of controversy. There wasn’t much the first time around because of the referee, but when the referee left, more time was wasted on superfluous discussions.

Rules: Participate by going to scattershot.gigemech.net and choose a color and one of the four ships. You and another person control one gun of two on that ship, and you shoot to propel yourself, attack other players, and collect points. The goal is to be the last ship standing.

My Experience: There was a very weird lag when shooting, so strategizing by timing was nearly impossible. Nevertheless, I partnered up with this one girl and we tried our best to propel ourselves by firing at the same time. We ended up being out-of-sync most of the time, so I just fired in order to rotate the ship while she did an amazing job shooting enemies. I didn’t see any scoreboard or any reason for collecting points, so I thought that was unusual. I think the game would be better if it were more physical. Pressing a button, although straightforward, isn’t very engaging. There are way more things you can do with an iPhone.

Although this probably doesn’t count as a game worth a report, I just really liked it. It’s much more fun than hacky sack, with basically the same rules.

In a Kelp Field where 3 Cuttlefish try to woo some females:
3 Cuttlefish start with 5 Flurts + 3 Flurts in the pool (center of the table)
Each turn Cuttlefish take a decision in Rock Paper Scissors style. Cuttlefish can choose Alpha Brawl or Gender Bend.
There are 4 possible outcomes:
Alpha Dominance – one player chooses Alpha Brawl: this player takes 1 Flurt from each other player.
Shmooze – two players choose Alpha Brawl: these players both give 1 Flurt to the third player.
Pissing Contest – three players choose Alpha Brawl: all players put 1 Flurt in the pool
Polyamory – three players choose Gender Bend: the player with most Flurts proposes once, without discussion nor barter, how to divide the pool. If at least one player agrees the decision becomes effective. Otherwise, nobody takes anything.
The mating season ends when the first player is out of Flurts the player with the most Flurts makes babies. 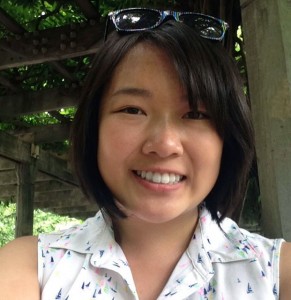 Hey guys! My name is Michelle.
Here is my website.