The Alpha is a version of the game that contains 100% of the basic features, the game interaction and logic. It typically doesn’t have polished graphics and sounds nor all the “levels” but it should be possible to play it and have a clear sense of the final game experience.

The alpha phase usually ends with a feature freeze, indicating that no more features will be added to the software. At this time, the software is said to be feature complete.

Exercise: Minimum viable product
Uh-oh the publisher (me) wants to ship a game by next Friday!
Each team meets with me and establishes what your “skateboard” exactly is.
Break it down in small tasks and assign them to the team members through codecks.
This will likely be the next milestone/assignment. 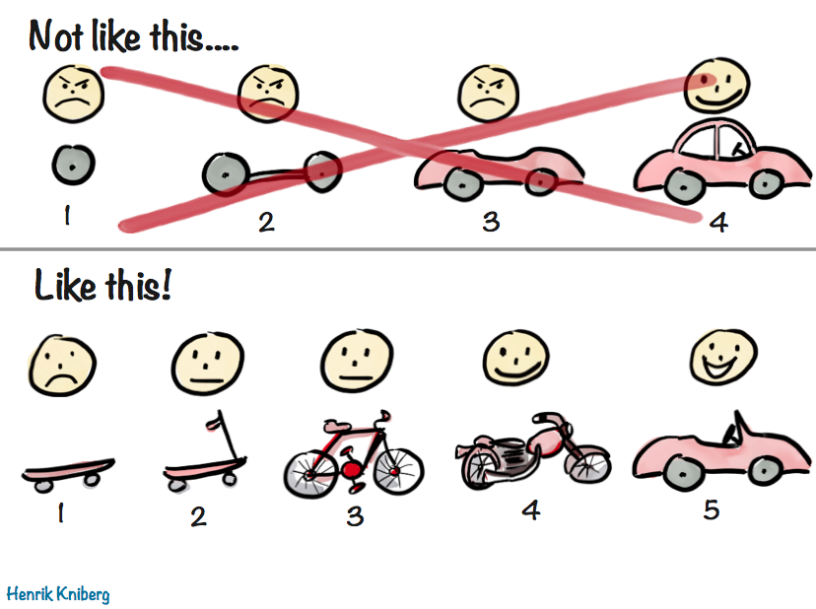 The Beta version of a game is basically the finished game, except for visual and audio fixes and polishing, tuning, and lots of bugs.

The Beta can be given to Quality Assurance (QA), playtesters and selected users (open beta), for debugging, and usability test.

The Gold phase, or release candidate, is the complete, ideally bug-free, game you can submitted for release. It may still have to pass certain certification tests that depend on the platform/console.

Technical certification may involve memory usage and loading times, compatibility across devices, legibility of the interface, language and localization issues, certain settings that have to be there, and hardware related features (eg. the PS button opens the menu, you can always quit etc…)

For our certification the checklist is:

Games are never actually done, but at some point you need to stop working on them because they need to be shipped or submitted as assignments. Still, there are a few things you should consider before publishing anything. Here’s a handy checklist:

Does the game run?

Does the game run outside of Unity (or whatever development environment you are using)?

Does the game run on a computer that is not yours?

Did you build the game for the other major operating system that is not the one you use?

Does the game open in fullscreen?

Does the game look fine on different resolutions?

Does the game have a title screen?

Does the game display the authors’ names?

Can a player understand how to play without relying on external information?

Does the game have a splash image and a custom icon?

Does the game have sound?

Can you quit the game without alt-tabbing or killing the process?

Is there a way to restart the game without quitting?

Does the game restart when you reach game over or any end state?

Are the names of the files you are publishing consistent with the name of the game?

Does the game support game controllers (if they make sense for the gameplay)?

Does the game comply with the content guidelines of the platform?

Does the game meet the Technical Requirement Checklist of the platform you are targeting?
(the actual list may only be available when you subscribe as developer)

Upload a downloadable build of your project on itch.io for both mac and windows (it can be unlisted if you want)

Make a short trailer/gameplay video <1min. It can be very simply edited but do edit it and show the title.