Just a few small tweaks for all to see:

–made the bubbles a little prettier

–updated the ending scenes to both use the bubble system, and to use digital ink and color instead of my original plan of digital color on pencil for a sketchier style. I’m going to redo the start scene to match as well tomorrow, though I understand that update may be ungraded. Beginning also has an extra bubble explaining the texting system now. Since they’re using the bubble system, the cutscenes can now be stepped through with the x key as well (just like dismissing a message). I do want to go back and put in a Flash comic system for that at some point, but that point is not during the mad rush at the end of the semester, and the bubble system looks better than a haphazard scattering of stuff.

-finally got the dang robots to reverse when they hit things. It’s not a huge thing but it’ll add something when I get to making more levels, I think. 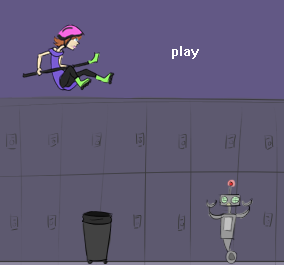 I did not get nearly as much done on this as I wanted to. This is because Flash and Flixel apparently both hate me, and would not cooperate when I tried to do a test run Flash comic page, or tweak enemy behavior a little bit. So the game has one level less and much less nice beginning/ending art as I wanted it to at this point.

Still, it’s a thing. It works.

Arrow keys to move. Up jumps, down hits the brakes. Space attacks. Z checks a message if your phone is buzzing. X dismisses the message. You may get info from checking your phone that will affect where you go, but you will also be distracted by it.

Space/Mouse to go through intro and outro sequences. R restarts a level if you’ve died, or the game if you’ve won.

(Summary of things I wanted but didn’t get: Wanted to do the intro comic in Flash, since allegedly Flixel can embed other SWFs. Also wanted there to be similar outro comics, and color and suchlike on them, but I took too long trying to make Flash not be my enemy. Definitely going to revisit that, even though it’s too late to present those things. Currently the intro jumps around a comic but not as nicely as Flash would, one of the outros uses the ingame speechbubble system, and one is an image.

The other thing that’s missing is that the robots are supposed to turn around when they hit things which should be INCREDIBLY EASY but then Flixel deprecated half its useful functions and I spent too much of yesterday trying to make that work. It’s not super integral, it just makes the cafeteria level a little weird.

working on level design right now so nothing visible yet but here’s a repost of the game I guess, since I was told to show the prototype

move with arrow keys, jump with up, brake with down, attack with space, check texts with z, dismiss message with x

So basically what I had for A4 was a platformer with three levels, two endings, and a funny texting mechanic that decided which levels you got. More importantly, I had all the code for that stuff; I was just missing the comic panel intro/outro that I had wanted. Which makes the updating part largely a matter of level design. I want more levels. Specifically I want eight of them. I already have three, which will survive with some minor updating. So there’s design and art for that. Other stuff to make:

–Probably a few more varieties of movable object. The code for that is all there, so this is just a matter of drawing the things and fussing with the speed and acceleration values.
–Level selection: Going to make it explicitly based on player choice; at the end of each level you can pick one of two possible levels to progress to. What ending you get depends on the order and number of levels you play. Some levels may not appear as options if you don’t check your texts. There wind up being (in the configuration I’ve come up with for now) 7 different paths through the game.
–Those damn Flash comic pages that I wanted to do and then I was too busy running around labs because my laptop died and didn’t have time to draw.
–Probably another type of basic enemy that uses the existing basic enemy code.
–I lied about not having to code anything. I want to make the final boss suck a bit less than it currently does. So that’s a little bit of debugging. Oh well.

But mostly I have to draw a lot of things.

Okay so I had like two hours with which to throw this together because my new computer has not arrived yet and I am borrowing one. (Fun thing: school computers don’t have Unity!) As such I only have a basic layout for the area I want to build up, and haven’t managed to get any fancy vegetation in. No fun shaders either, so I guess it still looks like Unity. Sigh.

Overall layout: got some plains, and a river, and a cliff and a mountain. The humans camp out on the lower part of the plains, close to the river. Further from the river there will start to be woods once I get some acceptable trees on hand, which is where you start out.

Part of the river will be swimmable; there will be a few difficult paths up the cliff, which you may or may not be able to traverse depending on choices you make. Further up the mountain there isn’t much life, but you might find important things there.

The story will be split into ten or so “years” for the lifespan of the main wolf, though you can die prematurely depending on your actions. The environment will change with time and season: the river will flood, the forest may burn in a drought, the area may become snowbound, etc. How the story plays out depends on how you interact with the humans, non-player wolves, and the environment.

I CONTINUE TO SUFFER FROM TECHNICAL DIFFICULTIES but it’s almost there, updated build posted, in-game story stuff is in, prologue and epilogue are not

also there’s no music because the filesystem is being a jerk and won’t show me the track I downloaded, this will hopefully also be rectified when the prologue/epilogue issue is

Your name is Molly. Your best friend Emily was on a date with some guy, but then she got kidnapped by robots, so it’s up to you to save her. By hitting things with a hockey stick. The robots are sort of incompetent so she’ll text you relevant information as she gets it. This bit of mindless exposition will be replaced by a neato interactive COMIC PAGE when technology stops hating me.

arrow keys to move, down to hit the breaks, up to jump

so yeah hurricanes are some nonsense 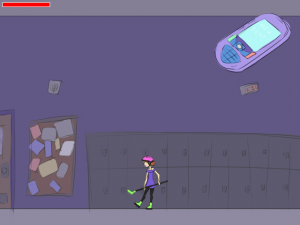 need to get phone code and comic pages working, insert enemies, might not be up by Thursday but definitely done over the weekend

Transit got the stupid Train Simulator rap stuck in my head. I don’t even know. More to the point, it also made me think of two games:

–Shadow of the Colossus– you could literally just spend hours going places in this game and it was enjoyable all on its own. (I also spent a good fifteen minutes running Wander headlong into waves when I discovered that they would knock him over backwards, but I am easily amused.)

–Wind Waker– Also had a lot of transit (BOATS), but somehow made people complain a lot about it. I dunno. Sailing around did get a little boring after a while, but nothing too bad I thought.

Game Design as Narrative Architecture reminded me of a couple things:

–Telling the story through setting: Portal does this and I love it. The whole story of the Aperture Science Enrichment Center isn’t told through any narration or text of any kind, it’s explored as you run around. I like that technique. A lot. It’s something that non-game mediums can’t really do.

–Effects of the player’s actions on the narrative: This actually reminded me of the doomed timelines in Homestuck. In video games, your character dies again and again, and you keep playing, but as Homestuck shows, there are sort of these alternate timelines where you failed. Wonder if something could be done to harness that in-game.

(Dead Daves keep piling up and dead Daves are somehow useful to the game?)

Iiiiiiiiiiiii don’t have a demo because I am using Flixel instead of Gamemaker, because Flixel lets me include Flash stuff and other shiny things but requires a bit more backend stuff before it actually starts to look like anything. So I have the backend stuff written but it looks boring and is not demo material. Demo will occur SOON but not yet, meanwhile have the character and a summary:

Right, so, you’re this girl. You’re in high school and you spend a bunch of time hanging out with your best friend. Everything is excellent but then your friend goes out with a dude who seems a little sketchy and he turns out to be a kidnapping alien whose motivations are– actually who gives a shit, dude just kidnapped your best friend, you don’t care why he did it, you’re going to go beat his ass.

So you grab your best weaponry (roller hockey gear) and do so. Your friend keeps texting you to tell you where she is, so you can avoid all that “princess is in another castle” nonsense.

TL;DR You’re rolling through your high school hitting aliens with a hockey stick, following the directions your friend texts you. Also, comic-book-page cutscenes, because Flash and Because I Can.

WHAT COULD POSSIBLY GO WRONG.

Also I will totally take name suggestions for the main character. Her friend’s already named.

Ideally this would have a more complex puzzle, or else be one in a series of puzzles.