I spent about half my time doing the Play Your City challenge, in which I and a group of people roamed several blocks of the city and attempted to make small “games” in public environments that bystanders could participate in. I thought the initial brainstorming session was the most productive part of this experiment, as we explored a variety of topics and referenced many past projects that I found exciting.

Of the games I did play, one I found interesting was a quick party game in which players are given Character cards with an Occupation, Vehicle, and three Hobbies. You must find three other people who share a Hobby with you, and go as a group to the moderator in order to receive a Point card as well as a new Character card. All the members in your group must have different Occupations in order to receive a Point. You also can’t score if two members in your group own a Vehicle that matches the current “Danger” Vehicles held up by the moderator. You play until someone gets 4 points.

I felt engaged by this game because of its simplicity and the cute card design. You can learn it in a minute and complete a round in 15 minutes. The game doesn’t require expensive materials or a large space. There’s a small element of negotiation, because you want to convince groups of two or three to stick together while they search for their final potential members, rather than breaking apart to try to match other Hobbies.

I felt some aspects of the game weren’t as polished and/or cohesive as they could be. The scoring mechanic, for example, led to an anticlimactic victory because no one knew how many points other players had. It was like a time bomb that could go off at any moment, but I didn’t get a sense of urgency because it was so abstract and removed from the rest of the game. One solution might be to give players all four Character cards at once, so that other players can directly see how many Characters you have left, and refuse to trade with you (although this would lead to other complications). I feel a sense of escalation is important to a game like this because the core gameplay is so repetitive.

The Vehicles felt extraneous. I never felt they were relevant because 1) they were on the backs of the cards, which no one bothered to look at, and 2) the person holding up the vehicle cards wasn’t near the moderator you had to find in order to score, so you forgot about them. The layer of complexity they added was also unnecessary, because they made the “core” matching gameplay more difficult, which was already at a good balance, rather than opening up new decisionmaking space.

I’d like to see the game expand upon the idea of negotiating with other players. Currently there is no incentive for players to form groups other than to match Characters. Having the ability to form more defined groups with a penalty for leaving could create an interesting new dynamic. 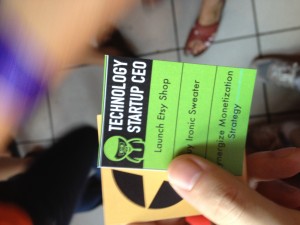