This is a creativity battle game. You must defend your territory against the other players by drawing the items from the cards in your hand on the board. Last territory standing wins!

Draw a series of circles in a circle, one for each player. Each player chooses a circle to defend as their “territory”. Each player should write their name or otherwise mark their territory using their marker.

When all players have chosen a territory, shuffle the deck and deal a hand of five cards to each player. The players may look at their own hands.

The object of the game is to take turns to try and erase other peoples’ drawings to ensure that you are the last person on the board with any drawings remaining.

There are currently two types of cards: object cards and modifier cards.

To play an object card, the player first uses the size ruler at the bottom of the card to measure how much space they can draw in on the whiteboard. They can then draw the item on the card within that space. The attack power is indicated in the upper right of the card and indicates how much power the object can attack with. The range ruler is in the upper left and can be used to measure how far the object can attack from its borders. Once the player has drawn their item, they should also add a line to the top of their drawing to indicate what the range of the object is and write the attack power next to that line. 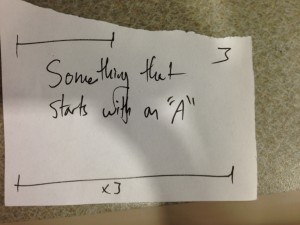 Modifier Cards allow the player to enhance the abilities of their previously drawn objects. Most modifiers add attack power or range; when played, the player should update their drawing as indicated by the card and update the range or attack power of that object. 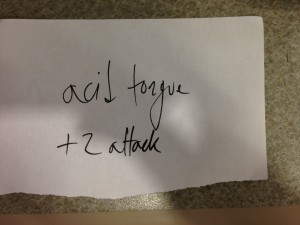 This game is played in turns. On a player’s turn, they draw once, DRAW once, and attack once.

Draw once: Draw a card from the deck

DRAW once: Pick an object card from your hand and draw it on the board OR pick a modifier and add it to an object that you already drew on the board.

Attack once: Choose one enemy object to attack. You may attack it with of your objects that have a range greater than or equal to the distance to that enemy object. If the combined force of your attacking objects’ attack power is greater than the enemy’s attack power, then that object is erased. 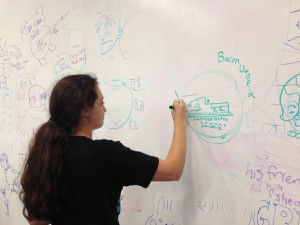 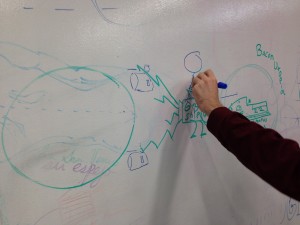 The playtesters had some good suggestions for improvements to the game:

Instant attacks/defenses  or other quickplay cards: The playtesters noted that it was disappointing to see their objects erased when there was nothing that they could do about it. They suggested having instant-play cards that they could play if they were attacked to increase defense.

Grid system: It was sometimes difficult to measure the distance between objects; one way to solve this might be to implement a grid system to determine distance. The downside to this is an extra constraint on creativity and added setup at the beginning of the game.

Smaller drawing range: The larger items have a huge advantage–they can span enormous areas much faster than a large ranged object can. The playtesters suggested having a smaller variance on the drawing ranges to combat this.

Specify how far apart territories are: If the territories are too close it can have a big impact on the game’s pacing; in this instance items were destroyed very quickly after being drawn. It would probably be advantageous to test several ranges to find a good balance.

Multiple modifiers: The players wanted to be able to use modifiers on the same turn as placing a objects–they found that they were often stuck drawing objects every turn to defend themselves and had no time to add any modifiers before their new drawings were erased.

What happens if hand is empty?: A question that follows the preceding suggestion is what to do if the player plays all the cards in their hand. How do they replenish it?

Trading system for points a la MTG so that the loser can have reprisal: If one player has an overly powerful object, it can become impossible to destroy. One suggestion is that the object has hit points that are diminished by the loser’s attack points if the object wins.

Object movement: The players expressed interest in being able to move their objects once drawn. Some investigation into this mechanic might be interesting.

There are certainly a lot of balance issues in this first round of playtesting: the overpowered larger objects and the inability to defend out of turn especially need to be addressed. Overall, though, the playtesters showed interest in the game and agreed that it was a fun idea.