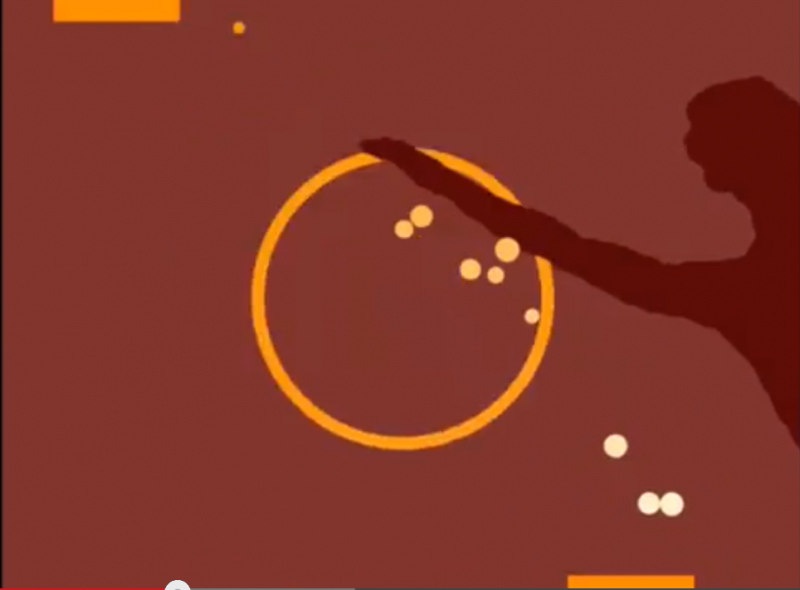 Concept: Each level is a classical element, which are wind, water, fire, and earth (in order) which are expressed through how the level is laid out. In the first 3 levels the player directs the balls to the target platforms. For the last one the player holds up the balls until they dissipate. In more detail:

Level 1: Wind
Players act as the wind, and direct objects to targets on either side

Level 2: Water
Players guide the flow of the water to pouring from above to the target below

Level 3: Fire
Players guide sparks from the fire below to the target above as they float up into the sky

Level 4: Earth
Players catch rocks and hold them up until they erode away

Overall I was happy with how the game came together, and even happier with the response from the people at the little play fair we had. I was a bit skeptical of how fun the game actually was, but lots of people asked to play it and kept me busy most of the 3 hours of the fair! Bunches of kids were even laughing and having a really fun time playing, as were their friends laughing along with the “yoga” like poses they were making. Several times I was about to grab pizza but there were people asking to play next, so I had to oblige and root em on 🙂

Tutorial (I used) to get the Kinect running on my machine which includes links to all software and drivers needed, except the  SimpleOpenNI driver which can be downloaded HERE.

When running using Processing, the first time you run it it won’t work, so just stop the program (WITHOUT QUITTING PROCESSING) and run it again, give it about 30 sec and it should boot up fine.

If you want to try running the exported application instead of using the source, libraries, and kinect install its worth a shot, but I couldn’t get the standalone application working. It can be downloaded HERE