Too Many Captains and Not Enough Wire is a multiplayer party game. One engineer and multiple captains need to work together pilot a spaceship and destroy enemies.

Unfortunately, as our game is hardware-based, you can’t really play it without our custom controller. However, while we were developing the game, we created a simulator of the controller, which you can find here: http://simulator.toomanycaptains.com/

How to prototype a game in under 7 days by Kyle Gray, Kyle Gabler, Shalin Shodhan, Matt Kucic

First of all, I had no idea that Tower of Goo was CMU/ETC project! I definitely remember playing that back in the day. Overall I think the advice here seems pretty solid. Some of it is familiar to me, especially the “creativity needs constraints” bit, which happens all the time in this class as well as other art/design classes I’ve taken and am taking (for example, Acting for Non-Majors).

One major class of advice seems to be about productivity, and debunking some myths around team dynamics. I definitely agree with the point about “2x the time doesn’t mean 2x the quality”, that’s sort of like the Mythical Man Month concept from the software engineering world. Similarly, the process of gathering concept art reminds me of a mood board.

I strongly resonated with the “nobody knows or cares how you made it” and “forget great engineering” notions — that’s something I’ve seen first hand (and subsequently evangelized at hackathons over and over). As someone who’s programmed professionally for a while, it’s often hard to let the temptation to optimize (prematurely) go.

Finally, the “make it juicy” bit reminded me of this awesome talk (recorded with poor quality, unfortunately) from a game design conference:

Have You Played… The Yawhg?

Overall we enjoyed the game! We think it would make a fun party game… not so much a single-player experience. More spectators would probably make it even better. The rounds are short, taking no more than 5-20 minutes depending on how many characters are in play and also how carefully you make decisions. Our first round was confusing to us because we weren’t sure how stats affected the gameplay and how our choices affected the stats. After playing a second time, we definitely began to see the appeal, but were unsure about replayability. After doing some reading of both Steam user and critical reviews (there’s even a wiki!) we realized how many endings there are (50+ for each of 4 characters). Once players learn how their actions affect their stats, they can effectively just “grind” their way through the game and ensure a positive outcome. However, the appeal of the game is seeing all of the different scenarios. We agree with the critical praise of the game’s artwork and music, both of which are somewhat beautiful but also kind of haunting. Overall, we both agreed that we’re happy to now have this game in our Steam libraries! 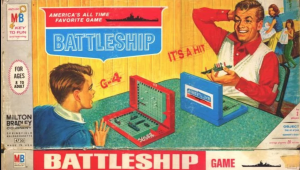 Play the original game and analyze it

Battleship is probably one of the first tabletop war games children play. The design of the board and pieces aren’t very bright or colorful like other children’s board games and instead use fairly muted colors to mimic a cold sharpness of a naval war room. It’s rules are simple but the stakes seem higher than other guessing games like Guess Who. Key phrases like “hit,” “miss,” and “you sunk my [boat]” give the players almost a script to follow through the game.

Best: Simple rules, not too much skill difference between beginners and expert players.

Worst: Repetitive and there’s not much variety. Similarly, there is a limited skill gap between novice and expert — not much skill can be gained via repeated plays.

Do some research on its history

Battleship began as a pencil and paper game dating back to World War I. In 1967 it was released by Milton Bradley as a plastic board game. In 1979, it was one of the first computer games.

In the 1931 version of the game (called Salvo), initially players can target 6 squares at once (and attack them all simultaneously). As ships are sunk, less squares can be targeted. There are several variations of this game mechanic. The amount of squares you target can be a fixed number each round, or it changes based on factors (such as how many ships the player has left or the size of the player’s largest ship). There’s also differences in how successful attack are called. Sometimes only the amount of hits and misses are announced without specifying where (if more than 1 square is targeted at once)/whether the ship sunk. In another variant, the players can change the location of their ships every 4-5 turns.

The phrase “You sunk my battleship!” has become associated with the game, as popularized by the game’s earliest commercials (from the 1967 Milton Bradley reboot).

What are some similar games?

Battleship Game and GPS / Battleship Google Earth is the Battleship game in real life. The grid is placed in google earth, and the player must be at the specific locations and call “drop” in order to attack the coordinate.

Guess Who is a different game where there’s a mystery/hiding element, as well a guessing. While in battleship players hide the ships in location unknown to the other, in Guess Who a character is selected and is hiding amongst the crowd. In Guess Who literal hints are given, while in Battleship the hit/misses act as the hints each round. One major difference is that the guessing/hiding is done by both players in Battleship, while in Guess Who the players take turns in these roles.

Captain Sonar: an eight-person, real-time, grid-based, naval-themed game. Each team tries to discover the others’ location, and fire weapons when confident. However many maneuvers exist to throw off detection. The game is much more skill-based than battleship, and has more replayability as there are 4 different roles and each “Captain” (one of the  roles) may employ different tactics, leading to varied gameplay.

Developing the prompt: “make it more story-based”
The loose premise of being some sort of commander in a naval war room decided where to strike is already in place for the game. We could either build off of that, or create a new scenario altogether without really changing any core parts of the gameplay.

What’s fun about story games is the the feeling of having control of the direction of the story with choice. Right now Battleship already has a choice mechanic in place with where to attack, so building off of that we could have each guess further some sort of plot. Replayability is also an important factor, especially for board games, so making each playthrough have it’s own unique variation of a general narrative should be considered. 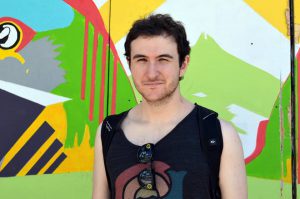