After an half-day-trip to FallingWater, I rushed to Arcade Theater; although I only have chance to take part in the social and street games, I still had a great time the whole afternoon. 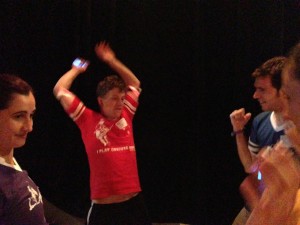 It was the first game I played there, and its rules is quite simple. Similar to other “Attack & Defense”  games, everyone protects his/her own weenis which attached to his/her elbows and at the same time tries to grab the enemies’ weenis.

It is actually   a “War” game because every player must pay attention to both defense and attack (so reaction speed is most important), and if you want to play well, some strategy such as team play should be considered.

It’s really fun except for some scratches on my arms. LOL 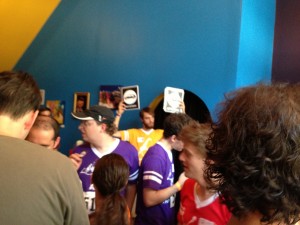 It’s a matching games and reminds me some part of “D&D” (online?) role play games —-the player in the inn who has a list of requests try to find the other players which have the same request and different professions to form a team.  What we need to do is just SHOUT out our requests and occupation.

The vehicle rule add some difficulties. 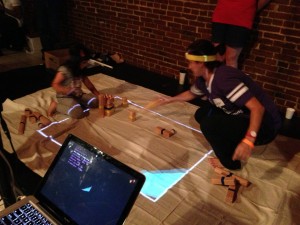 It’s a cool game not only because it use digital tools to detect the players action, but also because it’s a teamwork game actually even it looks like a competition between two players. 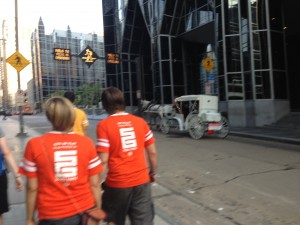 It’s interesting that after two round, the zombies seems to get intelligence and surrounded the human who had the anecdote to blcok the way of the other humans.

But I still don’t get it how to define when the humans win or the zombies.

My role is a townspeople, but because I didn’t know the rules of the whole game ( I did’t even know all the role types), I just kept searching for the hidden “witness”. Till after the game, I started to figure out the rules and stories. =_=

What I got from the festival was: 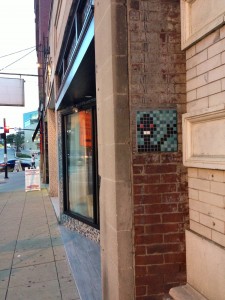