So the idea behind this project was to have endangered animals fall down onto earth, and holding down the spacebar would expand the earth to allow you to catch the animals. The idea is to avoid the “not cute” animals.

We also made another prototype based on the suggestions we received in class. Here you hold down the button to either expand or shrink the circles(planets). The goal is to avoid letting the projectile crash into the circles. 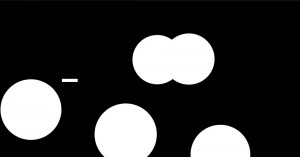 The idea is that the planets themselves have a gravitational pull, so there would be a challenge to balance shrinking and expanding the planets. We haven’t implemented the gravity yet, so all you can do right now it expand and contract the planets.