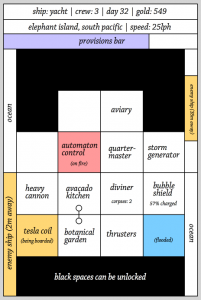 I was thinking of more multitouch ideas and I think that’s the direction I’d like to go for the final project. I’ll continue my dream game during Senior Studio.

My idea is an iPod ship management roguelike in which you ‘activate’ rooms on a ship by pressing them with your fingers. A room only fulfills its tasks while you’re holding your finger on it (e.g. a kitchen makes meals for the crew, or a cannon fires). You can activate multiple rooms at once, but no more than the number of crew members you have. You begin with 1-2 crew and can go up to likely 4-6.

You have to balance provisions, speed, weapons, shields, gold, time, and other variables. You encounter enemy ships (represented by bars on either side of the screen), who fire and move towards you. How you position your rooms matters – if an enemy fires towards your left, rooms on the left side of your ship are more likely to get damaged. Once you get lots of crew and rooms, the game becomes extremely micro intensive because you have to keep switching between rooms. A combat sequence might involve you alternating between cannons and shields with one hand (you get an alert when the enemy is about to fire), while brewing a storm and clearing a flood with the other.

You also encounter ports where you can purchase rooms, recruit crew, repair your ship, and expand it to accommodate more rooms. The game gets more complex as your ship and number of crew gets larger. It has similarities to FTL and Lovers in a Dangerous Spacetime.

My biggest concern is whether the game is too complex or cluttered for an iPod-type device. The interface, including the rooms, would mostly consist of simple symbols. I think as long as there’s not much text the audience can understand everything.