Gather animals, plants, machines, and other objects from various environments and tear them into their components (my current broad categories are body, mind, soul, and time). Organize these components in a ‘library’, and combine them to make new objects and materials. You can eventually build your own living, intelligent creatures, structures, and objects. 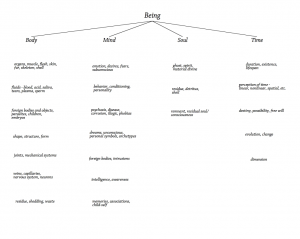 The nature and complexity of the crafting is my main concern. I played Doodle God and Doodle Devil, and was frustrated by how lots of things didn’t combine that logically should. I felt restricted by the developer’s limitations. Some ways to solve the issue for this game might be:

1) Make materials individual modifiers rather than elements of a whole, so that you can combine any materials to form a basic ‘creature’ with modifiers attached to it. This approach is similar to the creature stage in Spore. An example might be if you have a “predatory behavior” material you got from a bird, you could apply that to your formative creature and it would then follow that AI. This is the least interesting approach in my opinion.
2) Require specific materials to craft a new distinct object, but you can add any amount of each material. The new object would have a modifier depending on how you deviated from the ‘right’ recipe.
3) Divide materials into categories, and recipes require anything from those categories. This way you can substitute similar materials (like steel and copper) and have a similar end product.
4) Materials have descriptions or tags to suggest their nature and purpose, and you learn more and more methods to ‘discover’ recipes during the game.

My current conception of ‘crafting’ is the same as existing games like Minecraft, Don’t Starve, TLOU, etc. (combine objects to form more complex objects based on recipes). I don’t know if this type of system is interesting, or if there’s a different way to craft. Two important things I want to emphasize are: ‘recipes’ should be figured out through logic and trial-and-error; and the game shouldn’t reject ‘incorrect’ combinations.

I probably won’t be able to make a game with a narrative in the time frame of this class, but if I did, it might involve building objects of increasing complexity, unlocking more materials and methods of creation. Your creatures and automata give you access to additional areas, like the forest, the shore, the mountain, below the earth, the sky, etc. As you build more complex creatures and structures, you have to deal with the ethical and logistical implications of sentient and emotional beings. The overall goal is open-ended, but the fact that you’re constructing these creatures suggest that you might want to 1) build a ‘perfect’ creature, or 2) build a creature more intelligent than you. One thing to note is that it doesn’t have to be limited to ‘creatures’, you could make inanimate objects and more complex elements.

The idea of deconstructing and constructing objects has some philosophical implications I don’t really understand, but here’s some Wiki links I was looking at: