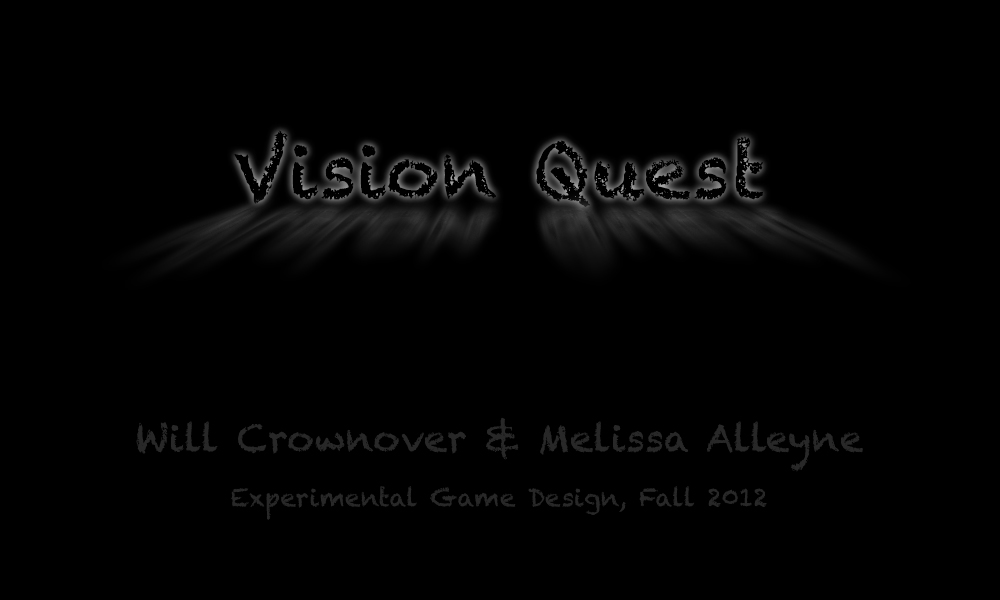 Do you have the Will Power to find your vision?  Or will your quest merely deteriorate into a struggle to survive?

Working off our first and third ideas.

Idea 1 split screen long distance relationship puzzle game where text messages between the characters prompt the player to find the solution to either save or split the couple.  The puzzles are solved by moving objects between the two sides of the screen

Idea 3 mobile game. you as the player have found a lost phone. Your task is to return it to the owner by using the information you gather – reading this person’s texts, fb messages, emails, or looking at her/his pictures – to determine where this person may be. You must physically i.e. IRL go to the building suggested by the clues to progress in the game.

Play –
There are two people: one enjoys the city and the other enjoys nature. To be together they will have to compromise on where they settle

Interaction –
Elements in the entire world will be interactive. There will be planes, trees, homes, etc. Once you hover your mouse over any one of these items you’ll hear a short clip of say a plane flying by, the wind blowing through the leaves, or the sound of a family watching television.

The world –
Moves from city to nature ranging from a more industrial setting to natural in between. The screen is split in half such that at any one time the player can only see a portion of either of these extremes. Depending on whether the player’s mouse is on the left or right side of the screen, the corresponding side’s character will automatically move.

End – the staircase has to be built in order of physiological, safety, love/belonging, esteem, self actualization. Each box corresponds to one of these categories. Once a player has reached the end a series of clips will play showing that person’s life

The World – Pile of boxes in the center

Picture of one of the levels. 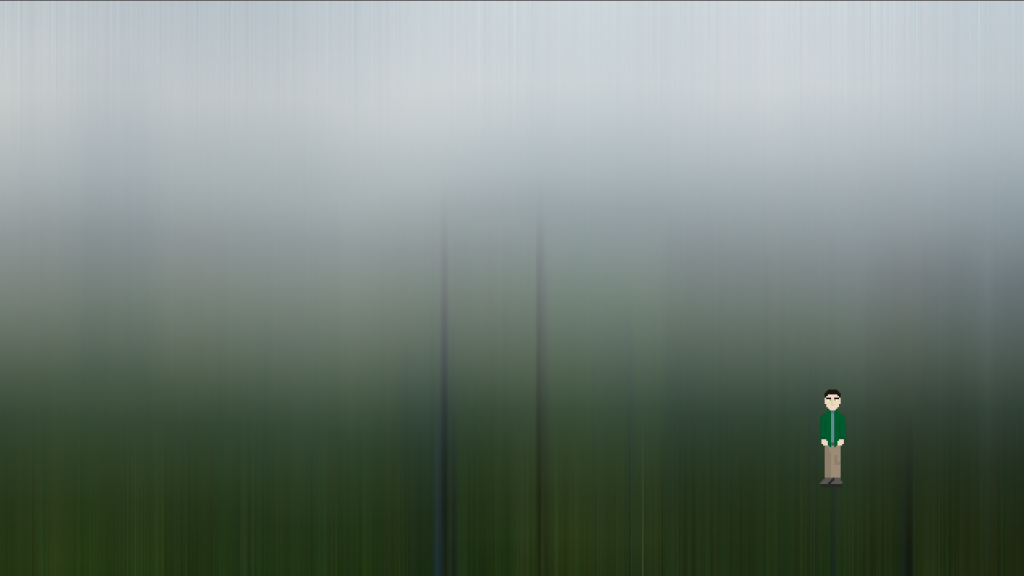 Download gmk zip and open in GameMaker to play.  File

This article seemed a bit outdated to me.  In the article the author talked about how games have to base themselves off emotional residue of other narratives in order to be successful.  I disagree in that I don’t think just games play off this base.  Many elements of life and story telling rely on a foundation that the person listening/playing is human and has in some way a shared experience to the story.  The first years of life are all about building this foundation of emotions and without it the world would seem strange or misinterpreted.  But at the same time there needs to be room to fill voids in the story to make it a personal experience.  I was interested in the role of urban designers described in the article.  They should design a space in which people enjoy to use but is not completely dictated and filled with meaning.  People want a place they can call their own, just like in literature or games.  Perhaps this is why games like Minecraft are so successful   Everyone shares the same base and motivations but what they create is uniquely theirs.

How to do Things with Video Games – Transit –

I pretty much agreed with the author.  Games are becoming a bit more about a journey narrative rather than linear jumps.  I like this however.  For me I do enjoy the stories in games much more than the action depending ont the situation.  But I also like simulations with out any story at all and I see them as equally thoughtful and interesting works.  So I dont believe that for a game to be successful there has to be a strong story wether it progresses rapidly or slowly.  Some of the best games have no plot except for what the player puts into them.  I do completely agree that games can be more enjoyable than real life because there is a chance to find something new with relative ease.  World exploration games are a personal favorite of mine.  Seeing what I can discover and how I can move through the space is extremely rewarding to me, narrative or not.

Working out images.  I have a Song, Character, and Concept.

Concept.  You play as a robot trapped in a lab facility.  You can travel through the rooms but cannot exit them.  However you can download your core to the system and circuitry and re-upload to other robots in another part of the lab facility.  There are two playable ares in the game.  Real time physical bots or circuit grids.  You have to blend the two worlds to escape the lab with as many counter part robots as possible.

What beautiful starlight, it must be sacrificed for progress.

Click on stars.  Try to catch the shooting star.  Play With the help of an enlightened entity you will learn of the path to Nirvana. 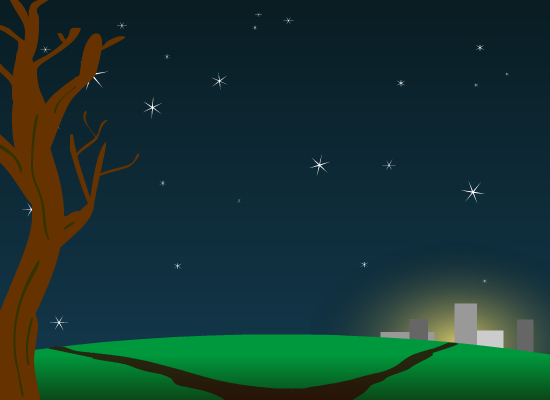 The scenario is, you get to control the stars.  Rearrange them into new constellations and forms to light up the night sky.  The problem, as time passes the development of the nearby city grows.  The light pollution from the metropolis is starting to hide the beautiful star light.  Can you convince the town to change their ways or will you loose your gift to societies “progress”.

The interactions at the start would be a sandbox of stars in the night sky.  The player can move them however they want.  To progress the game they would click on the tree and watch it grow showing time passing.  As time passes the city in the distance begins to encroach on your view of the sky.  Now the goal of the game is to some how arrange the stars to prevent the city from continuing to obstruct the sky and pollute the environment.  I could see three endings as of now, 1 The city takes over, failure, 2 the constellation is so beautiful the city notices it, success, 3 a specific arrangement of stars brings in an asteroid and destroys the city, radical.  Any advice on other scenarios or game mechanics would be appreciated.

The look of the game will shift as I figure things out.  The image above is a general layout test. Idea 1 – This was the first character face that came to me as I began my work.  I wanted an expressive robot that used hinges and joints to move parts of the face around.  I dont consider this the final look if I worked with this idea.  I dont have an interaction in mind for it yet.  Perhaps the interaction could be either assembly or disassembly of the robot to help it find the perfect expression.  Advice on how to make it more expressive or more hinge and joint reliant would be useful.

Outcomes: The robot has found the perfect expression with your help OR You leave the robot’s face horribly scarred and disfigured. Idea 2 – The second idea I had was interacting with a brain hooked up to a simple emotion display unit, which is just a smily face on a screen.  For this interaction I wanted to explore a character that in normal circumstances would be very intimidating but now reduced to just its thoughts and a dumbed down face, how does this change the players interaction with the character.  One idea I had was this brain once was a criminal master mind and is now being preserved and interrogated in order to fix the criminals last scheme.  Any other suggestions on an intimidating character mind would be helpful.

Outcomes:  Solve the crime by successfully interrogating the brain OR The brain perishes because it took to long to get it to talk. Idea 3 – A guardian bodhisattva has returned to the world to help you find the path to enlightenment.  The problem, it is rather judgmental of your choices in life.  Through a series of questions and interactions with the bodhisattva enlightenment can be revealed to you.  How many lives will you have to live in order to reach the ultimate state of nonexistence. Or will you frustrate your guide to the point of abandonment.  This character would use color and sound to respond to the players choices revealing either progress or frustration. The eyes in the image above are a cultural symbol of Buddha’s enlightened mind.

Outcomes:  Enlightenment is attained without having to live an excessive amount on lives OR The bodhisattva abandons you because you cannot see past your closed mined ways.