Mirror mirror is a collaborative multi-screen multiplayer puzzle game spanning 3 computers located next to each other. Each level contains one or more lasers, mirrors, and circular targets in a puzzle-like configuration. The 3 players are able to move and rotate the mirrors to bounce lasers across multiple screens. The goal of the game is to pass the laser(s) through all of the targets. In many situations, players are dependent on other players and must discuss strategies in order to effectively use the provided mirrors and lasers.

Game where you need to put on the appropriate face to get past people without drawing suspicion or trouble. The player is walking through a neighborhood and you need to smile at the police officers/citizens, and put on a mean face to avoid trouble from the gang members. If approached by a growling dog, you have to put on “yelling” expression to scare off the dog.

Cross-reference Google Street View and a Poverty-level API. You’re set in a start location and must put on the appropriate face to continue to the next “Street view location” and progress. 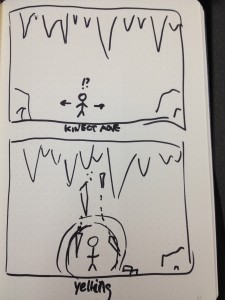 Cave In is a game where players must avoid falling rocks inside of a cave using their body. Players can attempt to “push” falling debris away from them by making noise such as screaming or yelling. Rocks of different sizes/weight will fall at different speeds, and making noise will only deflect small rocks. Large falling rocks will only change trajectory so players must run and yell simultaneously. The goal is to survive until the end of the round.

Roadkill is a Kinect-controlled game that mimics Frogger. The player must successfully cross the street by moving forward and side-to-side to avoid cars and make their way to the goal. Players can flail their hands to try and get cars to slow down. Some cars such as taxi cabs will not slow down. Levels will scale by  the number of lanes and the speed of traffic (i.e. 2 lane road vs. 8 lane highway) 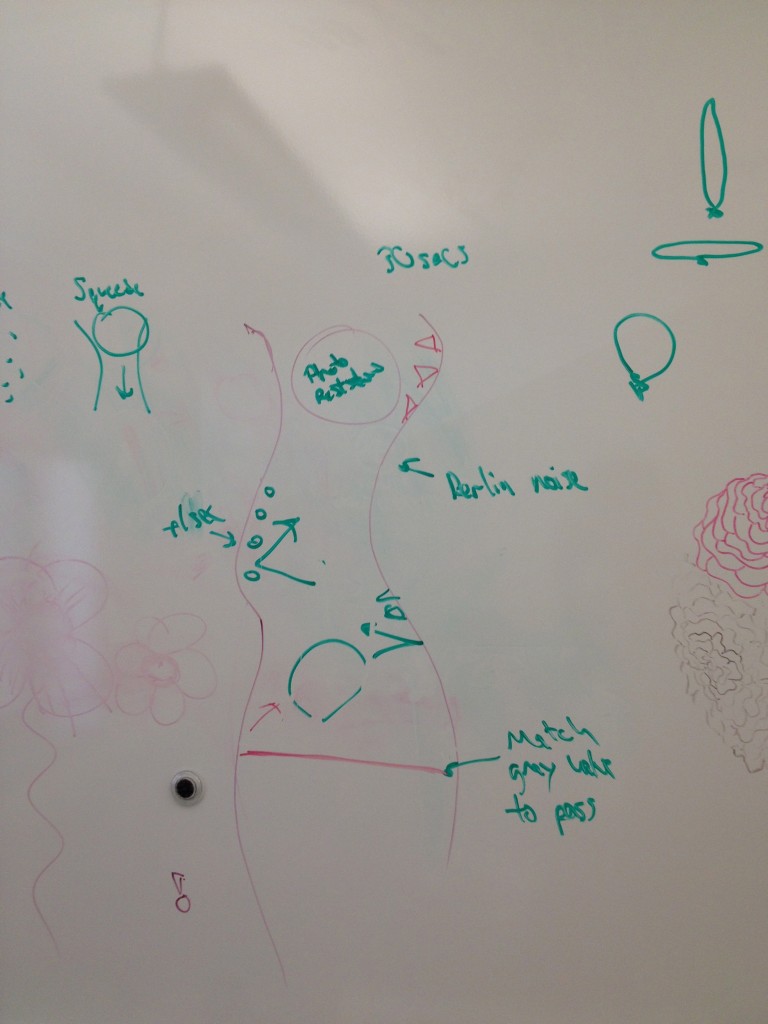 Our game is a time-based runner where the player is a bubble/balloon that must navigate through a vertical tunnel by contracting itself to squeeze through cracks, and expand itself to pick up time+ power-ups. The levels are procedurally generated and with enough time power-ups, the player could play this forever.

We used 3 different photo-resistors to control the player’s width, height, and luminance. Various situations would force the player to think about how to conform to the surrounding environment in order to procede before continuing.

The goal of the game is to stay alive as long as possible. 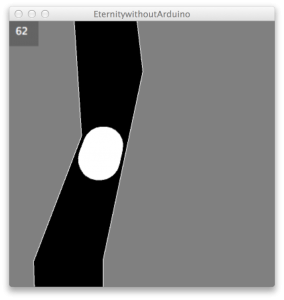 Spark is a king-of-the-hill type of game in which players must either remain the last one standing, or be the first to deplete their bar. The game is played with the Makey Makey, where all players stand on a conductive pad which represents a key. Players interact with the game by touching another conductive object on a table. This closes the loop and counts as a button press.

Players can deplete their bar by being the only player pressing the button. If another player is also pressing a button, a circle grows from the middle and will eliminate players as it grows beyond them. Touching another person’s skin while they are touching the button will also count as 2 button presses. 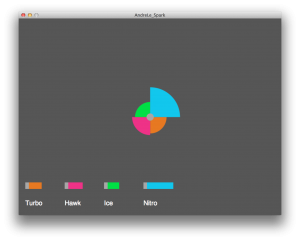 Follow Me is a platformer that requires two players to work together to traverse obstacles and avoid dangerous environmental elements. The players move and act as a unit and start off in a cave environment. The goal is to escape the cave together without getting killed. As the game progresses, the levels could get more fast-paced and harder, requiring engagement from both player and agreement on which actions to perform.

The interface for this game is touch. Using a MakeyMakey, two players must step on aluminum foil leads. They are able to press the “button” in the game by holding hands (long press), tapping once, tapping twice, or tapping each other repeatedly.

I wanted to create a one-button game that involved some type of teamwork and utilized a novel interface that took advantage of the Makey Makey such as a “dunk-tank switch” or involving a chain of people creating a conductive link.

Angry Mob is a turn-based strategy combat game inspired by Ninja. Players begin as Civilians in a circle standing at arms length, then take turns attempting to to tag other players’ hands in order to build their Mob. Civilians that tag other Civilians become Mob Leaders. Civilians that have been tagged become Rioters and must follow the Mob Leader’s orders. The goal of the game is to be the sole Mob Leader and control everyone 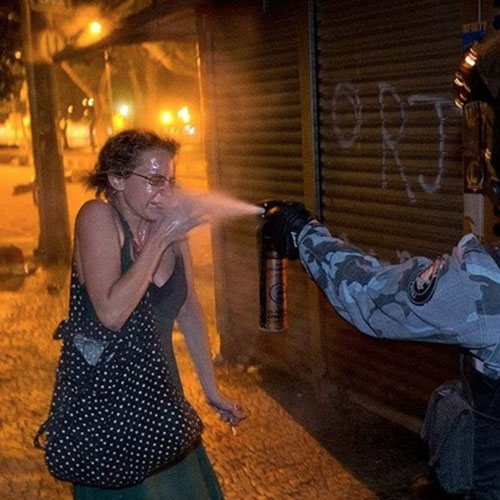 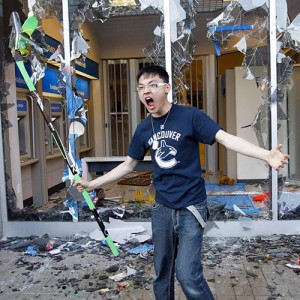 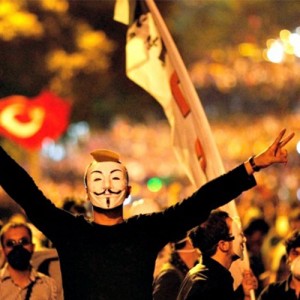 After playing Ninja last week, I was really inspired by the simplicity of the game mechanics, but was a little disappointed to see some players get knocked out of the game at the early stages. This idea played with the Power/Politics theme we were given last Wednesday and the game mechanics of Ninja. The overall goal was to add the element of totalitarianism to the game and to have players still be involved after being tagged. 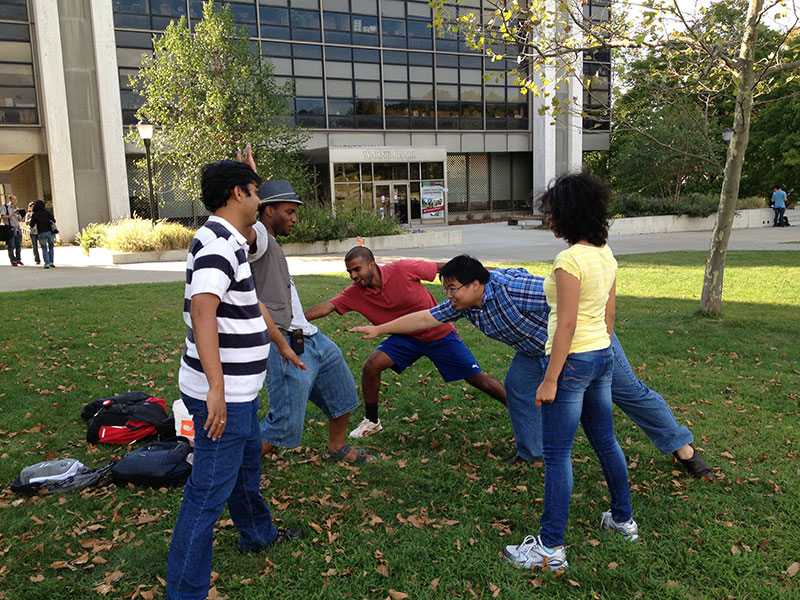 We tested this game with 6 players on the grass on campus. Some early concepts had players mirror or shadow their leader’s movements from where they were standing, but with everyone in different positions it quickly became frustrating to execute the same movements in a timely manner. It was also frustrating to people that they didn’t have any choice points as a follower. After loosening up the constraints and simply having the leader designate a target, we allowed the followers to attack the target however they wished. This increased engagement and made the game much more fun for everyone. 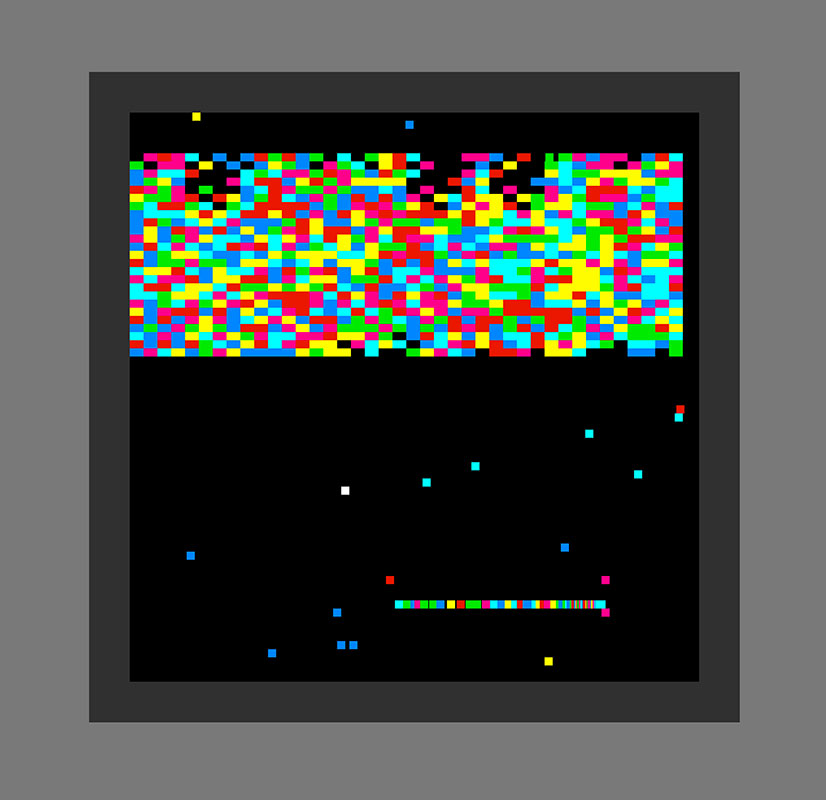 The breakout mod I created starts with a single white ball bouncing around the screen. As it hits a brick, it spawns another ball and inherits the brick color. The brick then dies and becomes a mini ghost brick that follows the paddle around and haunts it. If the ball hits the paddle, it loses its color and turns white as it bounces back. The bricks eventually regenerate with a random color and after a few seconds, there are so many balls on screen that it turns into a piece of generative art.

Over this last weekend, I attended the City of Play Festival in downtown Pittsburgh. The festival included games of all types, ranging from physical games played on the streets to social games played with PS3 Move controllers.

My favorite of the games that I played was Zombie Ward.

Zombie Ward is a turn-based tag game played outside in an open area like a park. Scattered about are bags containing various power-ups.

As a human, the goal of the game is to avoid zombies, find the “antidote” and bring it to the “secret lab.” As a zombie, your goal is expand your zombie army by tagging humans.

This game turned out so much more fun than I had initially thought it would be. We played with a group of about 35 people. The games started everyone in a circle with the moderator randomly choosing one person to be the first zombie.

From there the moderator calls out humans and zombies to take turns taking 1-2 steps (at the moderator’s discretion). This is where things get interesting. A degree of strategy is required to navigate the landscape without getting tagged (as a human) or letting any humans get away (as a zombie).

Things get really interesting towards the end of the game when the secret lab is found and everyone is making a mad dash for the lab with a horde of 30 zombies on their tail.

Being a game played in real life, it was much more thrilling to experience than a zombie video game. Best of all, because there isn’t any blood and gore, people of all ages can play. I would definitely play this game again.